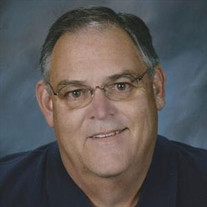 Max Brent Chambers passed away peacefully on April 11, 2015, surrounded by family and friends. Brent was born on December 3, 1943, in Provo, Utah to Evelyn Olsen and Max Willard Chambers. He was raised in Spanish Fork, Utah, where he graduated from Spanish Fork High School. After high school, he served an LDS mission in Southern Germany, an experience that influenced the rest of his life and career. After returning home from Germany, Brent attended Brigham Young University where he majored in education with an emphasis in German. Brent worked as a German teacher at Provo High School for 35 years, and Pleasant Grove High School for 4 years. He was well loved as a teacher and colleague and dedicated countless hours to his students and school. Brent was a lifelong member of The Church of Jesus Christ of Latter-day Saints. He served in many capacities, including MTC Branch President, a MTC service mission and 2 Bishoprics. Following college, Brent soon met the love of his life, Carolyn Larsen. They were married on April 20, 1973, in the Provo LDS Temple, and would have celebrated their 42nd wedding anniversary this month. Brent and Carolyn made their home in Provo, where they raised 5 sons and 1 daughter. Brent and Carolyn are also the proud grandparents of 15 grandchildren. Brent loved to travel. He was always ready to jump in the car and take off for a weekend excursion. While teaching, he was able to establish a German/American exchange program with sister schools in Germany. He traveled to Germany on over 20 different occasions. He loved planning these trips and delighted in helping students, friends and family discover and explore the country he learned to love as a missionary years before. Brent was a caring person and was able to create many endearing friendships throughout life. He was always the center of attention, and was always ready to share a joke. Above all, Brent loved his family. He always made time to attend his children’s sporting events, rehearsals, plays and concerts, and took great pride in all of their accomplishments. We’ll miss him, but we take comfort in knowing his struggles on this Earth are now over. Bis auf wiedersehen! Brent is survived by his wife, Carolyn Larsen; their 6 children: Cory (Emily) Provo; Kelly (Chanelle) Winter Park, Florida; Kevin (Amy) Bluffdale; Kirk (Marilyn) Provo; Craig (Chelsea) Heber; Kristen, Cottonwood Heights; and his brother, Gary (RuthAnn) North Logan. He was preceded in death by his loving parents, Max and Evelyn Chambers; and his grandparents, Emma Hopkins and Angus Olsen, and Mabel Goddard and John Chambers. Funeral services will be held at 1:00 p.m., Saturday, April 18, 2015 at the Grandview 15th Ward Chapel, 1122 North Grand Avenue, Provo, Utah. Friends may call at the church Friday, April 17 from 6-8:00 p.m. and Saturday, from 11:30-12:30 p.m. prior to services. Interment, Provo City Cemetery. Condolences may be sent online at www.bergmortuary.com. The family wishes to express appreciation and thanks for all those who helped Brent fight, especially the liver transplant team at IMC, IMC ICU team, Stonehenge of American Fork and the late Dr. Joseph Liddle.

Max Brent Chambers passed away peacefully on April 11, 2015, surrounded by family and friends. Brent was born on December 3, 1943, in Provo, Utah to Evelyn Olsen and Max Willard Chambers. He was raised in Spanish Fork, Utah, where he graduated... View Obituary & Service Information

The family of Brent Chambers created this Life Tributes page to make it easy to share your memories.

Send flowers to the Chambers family.