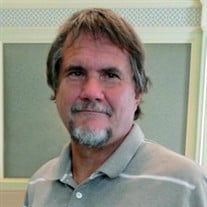 Brent Ronald Hansen, 65, passed away Friday, June 12, 2020 in Provo, Utah. Born September 28, 1954, he was the first-born son of Ronald and Arlyn Joan Hansen and eldest brother to Marty, Terry, and Kelly Hansen. He married Tami Davis, they later divorced. Brent was a unique individual — truly one of a kind. He never had children other than his furry felines. He had a soft spot for his cats...even writing them letters when he was away from home. He was a devoted son, providing over 60 years of constant companionship for his mother (hardly ever leaving her side) and he maintained a strong bond with his father. He was helpful to his parents with home maintenance, household chores, winterizing their homes, etc. He always made time to stay in contact with them. His parents were his best friends and closest contacts throughout his life. Brent was resourceful, overcoming things that others may view as limiting. Despite never having a driver’s license, he’d make his way around town. If he wanted to visit someone, he found a way and he’d show up. You always knew where you stood with Brent, his feelings were transparent and at the forefront. If he liked you, you could tell. If you had fallen from favor, he didn’t mince words. In hindsight, this is such a worthwhile characteristic and it’s something we came to appreciate and expect. Brent was an avid collector; he had a knack for finding value in uncommon currency and memorabilia. He shared his knowledge and excitement about the object and before you realized it, his passion would inspire appreciation for the item. You’d see it through his eyes. His enthusiasm was infectious! In his final five years, Brent’s resilience was at the forefront of his character. We admired his acceptance of life’s circumstances. He truly mastered accepting life on life’s terms and making the most of each day he was given. Brent is survived by his father, Ron; brothers: Marty, Terry (Maria) and Kelly (Denise) Hansen; step-siblings: Kathy (Bob) Worthen, Dennis (Charee) and Jerry Housekeeper. His life was not without trial or tribulations but, his earthly journey has concluded and he is perfect in his heavenly home with his mother, Arlyn Hansen; step-mom, Lena Hansen; grandparents: Henry and Elva Nilsen, and Howard and Dora Hanks; nephews: Adam, Travis and Brian Hansen, and many other family members who passed before him. We picture him happy and content reunited with his family (including his fur babies). Graveside services will be held at 11:00 a.m., Friday, June 19, 2020 at Eastlawn Memorial Hills, 4800 North 650 East, Provo, Utah. Friends may call at the Berg Orem Chapel, 500 North State Street, from 9:30-10:30 a.m. prior to services at the cemetery. Condolences may be expressed at www.bergmortuary.com.

The family of Brent Ronald Hansen created this Life Tributes page to make it easy to share your memories.

Send flowers to the Hansen family.