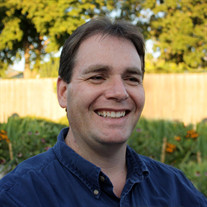 Brian Niels Jensen, 48, of Provo, passed away on Monday, July 8, 2019 at Timpanogos Regional Hospital following complications from a stroke. He was born February 9, 1971 in Rexburg, Idaho to Donald and Janet Jensen. Brian was the second of six children, which made him very independent. He learned to talk at a young age and shortly after a new baby brother came home from the hospital, the 18-month old Brian declared that it was “time to take the baby back.” Brian had a talent for music and could play the piano by ear. He also played drums in the high school orchestra, pep band, and marching band. While he was in high school, a new family moved in next door that had a daughter who also played in the marching band. Brian first got to know Deserie Lynn Watkins by giving her rides to band practice. They became high school sweethearts. Brian served as a missionary for The Church of Jesus Christ of Latter-day Saints in the Albuquerque, New Mexico mission from 1990-1992. After returning from his mission, Brian and Deserie were sealed in the Salt Lake City Temple on December 28, 1992. Brian attended Ricks College where he earned an Associate’s degree. Brian and Deserie made their home in Provo, Utah. In 1997, they welcomed their first baby, a boy named Carter into their family. He was followed by three girls: Rachael born in 2001, Kirsten in 2003, and Shannon in 2005. He spent his career at NuSkin where he worked as a security guard until his body was ravaged by Lupus and he could no longer work. Brian was an active member of The Church of Jesus Christ of Latter-day Saints, where he served in many callings. He especially loved his time serving as the Stake Emergency Preparedness Coordinator. He also was the ward financial clerk for one and a half years. Brian loved his family very much… He is survived by his wife Deserie, his four children and his siblings Julie Corr, Dennis Jensen, Michael Jensen, Eric Jensen, and Katrina Uriarte. Brian was preceded in death by his parents Donald and Janet Jensen. Funeral services will be held at 11:00 a.m., Saturday, July 13, 2019 at the Grandview 4th Ward Chapel, 1081 West 1060 North, Provo, Utah. Friends may visit with the family at the church Friday, July 12 from 6-8:00 p.m. and Saturday from 9:30-10:45 a.m. prior to services. Interment will be in the Provo City Cemetery. Condolences may be expressed to the family at www.bergmortuary.com.

Brian Niels Jensen, 48, of Provo, passed away on Monday, July 8, 2019 at Timpanogos Regional Hospital following complications from a stroke. He was born February 9, 1971 in Rexburg, Idaho to Donald and Janet Jensen. Brian was the second of... View Obituary & Service Information

The family of Brian Niels Jensen created this Life Tributes page to make it easy to share your memories.

Brian Niels Jensen, 48, of Provo, passed away on Monday, July...