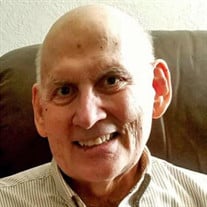 After a life of dedicated service, Brigham Vernon Cheney passed away of natural causes on February 9, 2022. Brigham was born to Silas Lavell and Klara Young Cheney in Salt Lake City on June 11, 1936. He was the youngest of six children. In his youth, he spent summers assisting his father's work as a forest ranger in the Uinta mountains. Brigham served a mission for The Church of Jesus Christ of Latter-day Saints in the West German Mission. He later served in the U.S. Army military intelligence, attaining the rank of Captain. As it was the height of the Cold War, he trained in the Russian language to add to his knowledge of German. As he neared the end of his postgraduate studies in the spring of 1964, Brigham met the love of his life, Marsali McAllister, at his singles ward in Salt Lake City. After a short engagement, they were married on August 20, 1964, in the Salt Lake Temple. Brigham earned a Ph.D. in Chemistry from the University of Utah. For 32 years, he worked at the Upjohn Company in Kalamazoo, Michigan, helping to develop lifesaving and life-improving medicines. He was one of a few innovators who began the Computational Chemistry department at Upjohn. Because of Brigham’s analytical skills and deep knowledge of chemistry, laboratory colleagues sought his insight and advice. Brigham engaged with the global scientific community, collaborating and publishing actively. He even enjoyed a sabbatical year in England, working at the University of Oxford. Upon retirement, Brigham turned his talent for research toward family history. He amassed a family history file of over 40,000 names, stretching back to ancient Persia. Brigham was proud of his heritage and loved to share the many stories of heroes, villains, and fascinating characters in the family file. For much of his life, he was known by his middle name, Vernon, but embraced his first name as part of his heritage in his retirement. He was a great-grandson of Brigham Young. Brigham shared his love of the outdoors on many family trips. He enjoyed hiking, camping, and swimming. He was a leader in the Boy Scouts, helping many young men attain the rank of Eagle Scout. Brigham served in many callings in The Church of Jesus Christ of Latter-day Saints. In the 1960s and 1970s, he traveled around Michigan and Indiana in callings that helped establish the church in that area. In 1980, while he was serving as bishop of the Kalamazoo Ward, the congregation's building was destroyed by a devastating tornado. He helped to raise funds to construct a new building. Brigham loved learning and culture. He traveled to many chemistry conferences, sharing his adventures with his family. And when possible, he brought them along. The year he took the family on his sabbatical to Oxford, England, was unforgettable. He also shared his deep love of learning with his children. In all areas of life, he exemplified the Cheney coat of arms motto: “The Best I Can Give.” Brigham is survived by his wife of 57 years, Marsali, and his six children: Jill (John) Griffin, Mark (Kim) Cheney, Heather Cheney, Karin (Travis) Pierson, Brigham (Jenn) Cheney, and John Cheney. His posterity included thirteen grandchildren and two great-grandchildren. A private family graveside service and interment were held in St. George, Utah, on February 19, 2022. Condolences may be expressed to the family at www.bergmortuary.com. In lieu of flowers, please serve someone you love.

After a life of dedicated service, Brigham Vernon Cheney passed away of natural causes on February 9, 2022. Brigham was born to Silas Lavell and Klara Young Cheney in Salt Lake City on June 11, 1936. He was the youngest of six children. In his... View Obituary & Service Information

The family of Brigham Vernon Cheney created this Life Tributes page to make it easy to share your memories.

After a life of dedicated service, Brigham Vernon Cheney passed...

Send flowers to the Cheney family.