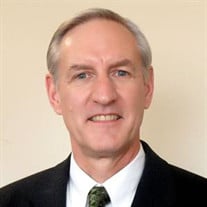 Britton Evan Davis, 61, of Provo, Utah died of pancreatic cancer on December 4, 2014, passing peacefully in his home while surrounded by his family. He was born to Donald Evan and Clara Janice Davis in Flagstaff, Arizona on November 8, 1953. Britton will forever be remembered for his love of the Savior, his family, and music. Britton served as a missionary for The Church of Jesus Christ of Latter-day Saints in the Japan Kobe Mission. He married Christine Lee Hansen for time and all eternity in the Salt Lake Temple on August 23, 1977. He served faithfully in the Church throughout his life and especially loved working with the youth and in the Provo Temple. He dearly loved Jesus Christ. His consistent, lifelong example of faith, obedience, and service leaves a legacy that inspires family and friends. Britton was a Music Educator in the Alpine School District for 30 years, teaching orchestra at Orem Jr. High, Canyon View Jr. High, and Oak Canyon Jr. High. He was involved with the Utah Valley Youth Symphony for nearly 40 years, serving as Conductor, Artistic Director, and member of the Board of Directors. He also performed with the Utah Valley Symphony as timpanist for 20 years. The impact of his musical career has benefited his family, the community, and thousands of students. His influence will be felt for generations. Britton is survived by his wife, Christine and their four children: Devin (Jill) Davis, Melissa (Joel) Staheli, Brian (Lauren) Davis, and Carrie (Taft) Johnson. He and Christine have 10 beautiful grandchildren, all of whom had a special bond with their Grandpa. Funeral services will be held at 11:00 a.m., Monday, December 8, 2014 at the Oak Hills 6th Ward Chapel, 1960 North 1500 East, Provo, Utah. Friends may call at the Berg Mortuary of Provo, 185 East Center Street, Sunday, December 7 from 7-9:00 p.m. and at the church Monday from 9:00-10:30 a.m. prior to services. Interment, East Lawn Memorial Hills. Condolences may be sent online at www.bergmortuary.com.

Britton Evan Davis, 61, of Provo, Utah died of pancreatic cancer on December 4, 2014, passing peacefully in his home while surrounded by his family. He was born to Donald Evan and Clara Janice Davis in Flagstaff, Arizona on November 8, 1953.... View Obituary & Service Information

The family of Britton Evan Davis created this Life Tributes page to make it easy to share your memories.