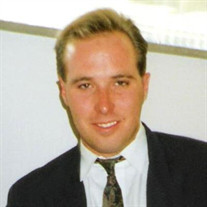 Bryan Dana Martin, age 44, passed away on February 24, 2016, at his residence in Draper, UT. Bryan was born on April 13, 1971, in Provo, UT, to Marsha Luise (Bowers) and Brent C Martin. He married Briana Jean Track on June 28, 2013, in Wendover, NV. He had a long career selling automobiles, beginning at age 19. He sold in Arizona, New York, Connecticut, and multiple locations in the Salt Lake Valley. His last few years working for AutoMaxx in Orem were the pinnacle of his career. He enjoyed traveling with his wife and experiencing a variety of eating establishments. He always had a kindness in his heart for his dogs and was known to have the cleanest car in the neighborhood. His sense of humor, shrewdness, and ability to talk to anyone endeared him to many. He looked forward to Sunday dinners with his nieces and nephews. Bryan is survived by his wife, Briana Jean Track; son, Kieson Stewart, Tooele, UT; father and step-mother, Brent C (Paula Peat Page) Martin, Estes Park, CO; brother, Boyd (Kristina) Martin, Highland, UT; aunt, Lou Anna Arnold (Roland), South Jordan, UT; uncle, Delbert Bowers, Wyoming; two nephews, Max and Mit Martin, and three nieces, Lauren, Sydney, and Ava Martin. He is preceded in death by his mother; brother, Brook; grandparents, Violet and Homer Bowers, and Clifford and Alta Martin. Funeral services will be held at 11:00 a.m., Monday, February 29, 2016 at the Mountain Point 4th Ward Chapel, 575 East 13800 South, Draper, UT 84020. Friends may call from 9:30-10:45 a.m. prior to services. Burial will follow at Provo City Cemetery. Condolences may be expressed to the family at www.bergmortuary.com. In lieu of flowers, donations would be appreciated to help pay medical bills at www.gofundme.com/crg4rhfg Contributions in memory of Bryan may be made to the Huntsman Cancer Foundation, 500 Huntsman Way, Salt Lake City, UT 84108, for brain tumor research. https://donate.huntsmancancer.org

The family of Bryan "Bear" Martin created this Life Tributes page to make it easy to share your memories.

Send flowers to the Martin family.