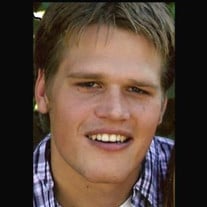 Our handsome son, brother, and father, Bryant Scott Ross Atkinson, passed away Friday, June 20, 2015 in Orem, Utah, from unknown causes, possibly a seizure or from complications with a prescribed medication. Born March 20, 1983 in Phoenix, Arizona to Scott LeRoy and Mary Esplin Atkinson, he was named after his father and his maternal grandfather, Ross Esplin. Bryant will be remembered as an incredibly loving, gentle, and compassionate soul. He was our gentle giant. He grew up in Mesa, Arizona; Rock Hill, South Carolina; and Provo, Utah where, in 2001, he graduated from Timpview High School. Through his formative years, Bryant was a hard-working student and received numerous academic honors, and his Eagle Scout Award. Bryant was an incredibly gifted athlete. Competing in football, baseball and track, Bryant received the Utah Valley Player of the Year in 2000, Region 6 and Timpview High School Most Valuable Football Player in 2000, All-State two years, Timpview High School Outstanding Athlete in 2001 and was recruited, given a full-ride scholarship and played at BYU as a linebacker. Bryant graduated from BYU with a B.S. in Health Science and was working at Huntsman Corporation in the Risk Management Department, a job he loved. The happiest day of his life was the day his daughter Cailin was born. Bryant was a devoted and loving father and cherished the time spent with his daughter. Their last day together they spent painting a teapot and cups, and then having a tea party. Cailin was the light of his life. Bryant was married in 2006 to Melinda “Mindy” Bramble until 2010. Bryant considered family members his best friends, and had a close connection with his dad. Bryant considered his father his personal hero and respected him deeply. He spent the last two weeks with family in Jerusalem, walking streets where Christ walked and making joyous and peaceful memories. Those days, those pictures, those memories are now sacred to us. As his loved ones, we will never pass a homeless person without thinking of Bryant. He was a fierce champion of those who struggled or were judged by society. Throughout the years he volunteered often at the local food bank. For his birthday this year, he requested that family members not give him anything, but asked us all to have a conversation with someone living on the street. He was unconditionally loving, slow to judge and accepting of all people. Bryant was physically and emotionally strong and continually picked himself up after setbacks. He overcame more in 32 years, and specifically in the last 10, than could ever be accounted for. He overcame addictions and various emotional defeats. He suffered from debilitating anxiety and through that and other challenges, was refined. We are so immensely proud of him, who he was and what he accomplished. He developed a beautiful relationship with the Savior through his trials, and we are grateful that he is truly at peace. He was a member of The Church of Jesus Christ of Latter-day Saints, and was a faithful home teacher. Bryant is survived by his daughter, Cailin; parents, Scott and Mary Atkinson; sisters, Erin Clegg (Spencer), Angie Whittemore (Ajay) and Haylee Atkinson; and brothers, KC Atkinson (Sadie) and Greg Atkinson (Heidi). We trust he is with his grandparents Anna and Charles Atkinson, and Olive and Ross Esplin. As his family, we miss our gentle giant and know that his life was a wonderful gift to us. We rejoice that he is with loved ones, and we look forward with great anticipation to the day when we will be with him again. Funeral services will be held at 11:00 a.m., Friday, June 26, 2015 at the Pleasant View 6th Ward Chapel, 2445 North Timpview Drive (650 East), Provo, Utah. Friends may call at the church, Thursday from 6-8:00 p.m. and Friday from 9:30-10:45 a.m. prior to services. Interment will be in the Provo City Cemetery. Condolences may be extended to the family at www.bergmortuary.com. If you wish to make a donation, we know Bryant would only wish for a donation to the Provo Food and Care Coalition.

The family of Bryant Scott Ross Atkinson created this Life Tributes page to make it easy to share your memories.

Send flowers to the Atkinson family.