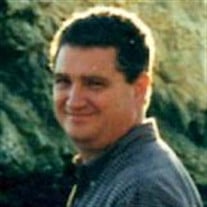 “The Heart of a Warrior, the Wisdom of a Sage” January 25, 1963 - February 14, 2016 At the age of 53, Bryon died Sunday evening, February 14, 2016 in Murray, Utah after over two years battling cancer. Bryon was born on January 25, 1963 in Provo, Utah to Ferr and Mary Blackburn. Growing up, he learned car mechanics from his father and musical arts from his mother. Some of his favorite childhood memories were playing with his cats, racing go-carts, and spending time with his maternal grandparents. In the fifth grade, he learned how to play the viola and performed in his high school orchestra. After graduating high school, Bryon spent a few summers at Aspen Grove BYU Family Camp and thereafter served an LDS mission in Sweden. Bryon then attended the University of Arizona on a viola performance scholarship before moving back to Provo where he met his future wife, Diane Arnett. On April 20, 1989, they married in the Jordan River Temple. The happy couple was blessed with three daughters, Kaitlyn (1990), Jacqueline (1992), and Rebekah (1995). In 1992, Bryon earned his Bachelor’s Degree in Psychology from BYU. Four years later, he earned his MBA Degree in Organizational Management from the University of Phoenix. The family lived in various cities in Utah and in Santa Maria, California, between 2000-2006. They enjoyed many family vacations, beach trips, and holidays together. He was thrilled to meet his first granddaughter, Evelynn Kim Schumann, in October 2015. Bryon’s interests spanned California beaches, motocross racing, oil painting, writing poetry, and viola craftsmanship. His musical talents allowed him to perform in the Santa Maria Philharmonic and Yellowstone String Quartet. Bryon was also known to play for church services and activities. He often took his daughters on his “daddy-daughter dates” while they were growing up to favorite places including the beach, favorite restaurants, and road trips. His demeanor was often light hearted and his many silly comments and stories either made his family roll their eyes or laugh alongside him. His passions included serving God, being with his family, and teaching. Bryon’s greatest desire was to be able to teach concepts from the book, Our Moment of Choice, his longtime work. His loving heart and never-ending passion for life influenced the lives of his family and friends, as it will continue to do so. He is survived by his wife, Diane, sisters, Janet Layosa and Barbara Blackburn, and daughters and sons-in-law: Kaitlyn and Sam, Jacqueline and Braedon, Rebekah and John, and granddaughter, Evelynn. He was preceded in death by his mother, Mary Alice Young Blackburn, father, Ferr Blackburn, and brothers Garth and Robert Blackburn. Funeral services will be held at 1:00 p.m., Friday, February 19, 2016 at the Pioneer 1st Ward Chapel, 400 North 700 West, Provo, Utah. Friends may call from 11:00 a.m.-12:45 p.m. prior to services. Interment, Provo City Cemetery. For full obituary and to send condolences, go to www.bergmortuary.com.

The family of Bryon Blackburn created this Life Tributes page to make it easy to share your memories.

Send flowers to the Blackburn family.