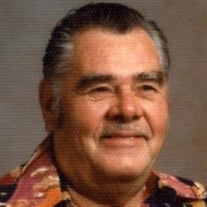 Buddy Jewel Goode, 91, of Provo, Utah passed away December 3, 2020. Buddy was born October 28, 1929 in Provo, Utah to George Lawrence and Alice Sorensen Goode. Buddy grew up in Provo and attended Provo High, as well as worked on the family farm. He grew up with five older sisters and was the baby of the family. Buddy married Dorothy Fillmore on January 16, 1950 in Salem, Utah. They brought into the world 2 daughters and 4 sons. Buddy and Dorothy divorced 21 years later. Buddy was an intelligent man and eventually became the owner and operator of Best Auto Wrecking in Provo, Utah and RV Auto wrecking in Payson, Utah. This is where Buddy taught his children how to work on vehicles, change tires, do oil changes, etc., knowledge they still use today. Buddy married Lorraine Hampton on August 30, 1972. They were later divorced. Buddy married Roberta Millet on January 7, 1981. They were later divorced. Buddy kept himself busy by building dollhouses, trucks, cars and the list goes on. Buddy was very gifted with his hands and could do anything he set his mind to. Buddy’s greatest passions were dancing and fishing. Buddy is survived by his children, Sally (Frank) Paige, Ilene (Bill), Darwin (Mary) Goode, Allen Goode, Johnny (Pam) Goode, Randy (Sarah) Goode and stepson Bobby (Heather) Hampton, along with many grandchildren and great grandchildren. Buddy is preceded in death by his parents, George and Alice Goode and 5 sisters, Edith Sorenson, Mary Henry, Elsie Draper, Eva Harward and Viola Hazel. Graveside services will be held at 11:00 a.m., Wednesday, December 9, 2020 at the Provo City Cemetery, 610 South State Street, Provo, Utah. The family will visit with friends and family at the Berg Mortuary of Provo, 185 East Center Street, from 9:30-10:45 a.m. prior to services at the cemetery. Bishop Mark Oveson will be officiating. Condolences may be expressed at www.bergmortuary.com.

The family of Buddy Jewel Goode created this Life Tributes page to make it easy to share your memories.

Send flowers to the Goode family.