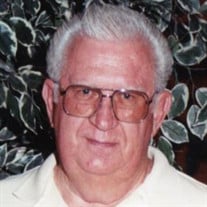 Burdett “Bud” T. Johnson was born May 1, 1931 to Vernile Independence Johnson and Edna Elizabeth Thompson in Provo, Utah. He passed away August 2, 2020. He married Carol Jean Garfield March 28, 1959. He had one son, Burdett Weston, from a previous marriage. Bud and Carol had two children, Chris and Dale. Bud attended Provo City Schools and graduated in 1949 from Provo High School. He served in the U.S. Army from 1955-1957 and spent time in Korea. He then served in the Army Reserves from 1957-1961. He worked for Union Pacific Rail Road. for 43 years and retired as a conductor. He was a member of United Transportation Union, Union Pacific Junior Old Timers and Union Pacific Old Timers. He was talented in restoring vintage cars as a hobby. He spent fun times with Utah Valley Old Classic Cars at car shows, parades, swap meets and made many good friends. He enjoyed many hours in the garage he built doing restorations. He could figure out how to fix, repair or build almost anything and was willing to help others as well. Bud was a member of The Church of Jesus Christ of Latter-day Saints and Provo Elks Lodge #849. Bud is survived by his wife, Carol; son, Chris, daughters-in-law, Cindy and Yelambai; grandchildren: Tracy (Corby), Bryce (Kenni), Brandon, Henry and Dana; and great-grandchildren: Hanna, Weston, Hailey, Kate, Kayli, Ryder, Wyatt Buddy and Myles. He was preceded in death by his parents, sons, Burdett Weston and Dale Trent; sister, Beth and brothers, KV and Gary. Graveside services will be held at 10:00 a.m., Friday, August 7, 2020 at the Provo City Cemetery, 610 South State Street, Provo, Utah. Condolences may be expressed at www.bergmortuary.com. In lieu of flowers, reach out to friends or help someone in need.

The family of Burdett "Bud" T. Johnson created this Life Tributes page to make it easy to share your memories.