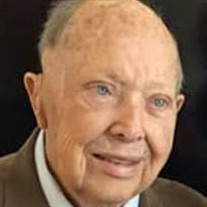 Our dear husband, father, grandfather, great-grandfather, brother and friend, Byron Paul Ferguson, passed from this life on March 27, 2019. Paul was born in Venice, California, on September 24, 1930 to Robert Byron Ferguson and Fawn Bernice Christensen. His parents had moved to California during the Great Depression to find work and provide for their young family. Paul grew up in West Provo, where he learned the value of hard work by milking cows and working on the family farm. He developed lifelong friendships hunting ducks and pheasants, roaming the fields of West Provo, and swimming and fishing in the Provo River. Paul graduated from Provo High School. After graduation he was called to serve as one of the first missionaries in the Finland, Helsinki Mission. He served as an interpreter during the 1952 Olympic Games held in Helsinki as part of his missionary service. Upon returning home from his mission he was immediately drafted into the U.S. Army and proudly served during the latter part of the Korean War. While on leave from the army he married our beautiful mother, Colleen Fairbanks, on December 23, 1953 in the Salt Lake Temple, and recently celebrated their 65th wedding anniversary. After being discharged from the army, he enrolled and graduated from Brigham Young University with a Bachelor’s Degree in marketing. He started working in sales and eventually Real Estate and land development. He developed many successful commercial and residential projects in Utah Valley. During retirement he and Colleen were called to serve a mission, and Dad was pleased to return to where he had served as a young missionary, in Finland. They enjoyed spending time with their family at their cabin near Strawberry. They also spent many warm winters at their condo in Mesa, Arizona where they enjoyed the Sonoran Desert landscape. They loved having their family visit them in Arizona and showing them around the desert. Later in life, Paul and Colleen developed a love for golf and spent special times playing with family and friends. Paul was a lifelong, faithful member of The Church of Jesus Christ of Latter-day Saints. He served as scoutmaster for many years. He made many lasting friendships with the students as a Bishop in a BYU ward and at the MTC. He was preceded in death by his parents; brother, Roger Ferguson; sisters, Gayla Ferguson and Julie Hamling, and an infant son, Mark Allen Ferguson. He is survived by his wonderful wife of 65 years, Colleen; brothers, John Ferguson and Kim Ferguson; sister, Dixie Peterson; children, Cindy (Lynn Lewis), Gregory Ferguson (Lorraine), David Ferguson (Donna), Jana (Todd Cordner), and Adam Ferguson; 28 grandchildren, and a growing posterity of 53 great-grandchildren, with 2 more expected shortly. He had a great love for his wife and all of his family. We will miss him. Funeral services will be held at 11:00 a.m., Friday, April 5, 2019 at the Orem Utah Suncrest Stake Center Chapel, 90 North 600 West, Orem, Utah. Visitations will be held at the Berg Mortuary of Orem, 500 North State Street, Thursday, April 4 from 6-8:00 p.m. and at the church Friday from 9:30-10:45 a.m. prior to services. Interment, Orem City Cemetery. Condolences may be expressed at www.bergmortuary.com. A special thanks to our Mother for all the care that she gave to our dad, he would not have had the long life that he did without her. Also, a thank you to his nurses and care at First Choice Home Health and Hospice and Covington Senior Living.

The family of Byron Paul Ferguson created this Life Tributes page to make it easy to share your memories.