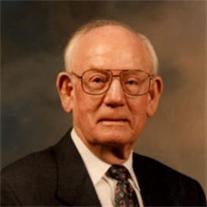 Calvin William Elton, Jr. (Bill), age 89, of Provo, Utah, passed away peacefully on November 20, 2011, in Provo, Utah. He was born on November 2, 1922, in Dividend, Utah, to Calvin William Elton and Melpha Nelson Elton, the 5th of 10 children. Bill was raised in the Dividend, Mammoth and Eureka area, graduating from Payson High School. Bill chose to enlist in the Army Air Corp at the age of 17 and after being trained as a mechanic for a year in California, was transferred to Nichols Field in the Philippine Islands. Five months later he was captured by the Japanese and spent 42 months as a World War II prisoner of war. He was one of nearly 10,000 prisoners that was forced to trudge in the Bataan Death March, sent to Japan and used as slave labor in the coal mines. After returning home from the war, he married Norma Hansen in Salt Lake City, Utah, on September 16, 1946. Their marriage was later solemnized in the Manti Temple. He attended the University of Utah and then joined the US Air Force, retiring as a major after serving his country for 27 years. They have three children, Karen, Kathie and Bill, who accompanied their parents to many Air Force bases throughout the United States and Wheelus Air Force Base in Tripoli, Libya. One of the many benefits of being a military family is traveling the world and his travels continued after retirement, visiting China, Italy, Spain, France, Germany, Philippines, Czech Republic, Turkey and Greece. Bill and Norma served a mission in Tampa, Florida, for The Church of Jesus Christ of Latter-Day Saints in 1995-1996. Bill is survived by his wife Norma, children Karen Eileen (Richard) Johnson, Kathie Jayne (Brian) Hickenlooper, and William Calvin (Michelle MacKay) Elton; 13 grandchildren, and 26 great-grandchildren with one on the way. He was preceded in death by his parents, sisters Ferol, Jean, Gail, Maurine, Beverly, Patricia, Peggy and Joan, brother Jack and grandson Daniel Aaron Johnson. Funeral services will be held at 11:00 a.m., Friday, November 25, 2011 at the Rock Canyon LDS Ward Chapel, 3050 Mojave Lane, Provo, Utah. Friends may call at the chapel Friday morning from 9:30-10:45 a.m. prior to services. Interment, East Lawn Memorial Hills. Condolences may be sent through www.bergmortuary.com.

The family of Calvin Elton, created this Life Tributes page to make it easy to share your memories.

Send flowers to the Elton, family.