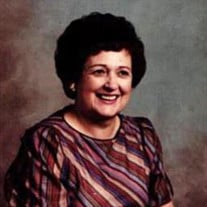 Cara Le Campbell Goodell, age 89, passed away peacefully in her sleep May 14, 2020 where she lived at Canyon Breeze Assisted Living Center. She was devoted to her family and to the gospel of Jesus Christ. She was a woman of faith who had a great love for God and His Son, Jesus Christ. She often shared that faith with others. She was a natural caregiver who loved to serve others. She was active in her faith and served as a Stake Relief Society president, Primary presidency, Young Women’s leader, and Primary teacher among other things. Her favorite thing to do was to teach. She was loved by those who knew her. Cara Le was born in Sargent, Nebraska on November 6, 1930 to Orville Le Roy and Bertha Pearl Campbell. She grew up in Scottsbluff where she graduated from Scottsbluff High School in 1950. She married Franklin Irvin Goodell in June 1950, right out of high school. They moved to Rapid City, South Dakota where their first 3 children were born. Cara Le joined The Church of Jesus Christ of Latter-day Saints on May 8, 1955. They were sealed in the Logan Temple in 1957 but later divorced in 1979 after having 8 children together. She loved to travel and when she was married to Frank they lived in many different places while he served in the Air Force. They lived in the Azores; Pensacola, Florida; Amarillo, Texas; Newfoundland; and Lincoln, Nebraska. After 20 years in the Air Force, Frank retired and in 1966 they settled in Springville, Utah to raise their family. Cara Le’s hobbies were genealogy work, sewing, baking, knitting, crocheting, needlepoint, canning, and gardening. She loved to read and enjoyed telling her friends and family about the latest book she had read, until she lost her eyesight in 2015. She soon discovered books for the blind and started listening to her books on tape. She had an incredible memory and loved telling people stories of her childhood and her experiences as she was a natural storyteller. She had many different jobs throughout her life but her favorite job, besides caring for her family and other people’s families, was at Cottonwood Hospital as a surgical technician when she lived in Murray, Utah. She loved living in Murray but after many years, she moved to Lindon to be closer to her daughter in 2004. She is survived by 5 of her children: Gary (Mary) Goodell, Stephen (Theresa) Goodell, Frank Goodell Jr., Charles (Roni) Goodell, Rebecca (Gene) Larson. She also has 24 grandchildren (22 living), 23 great-grandchildren, and 4 great-great-grandchildren. She was preceded in death by her parents; brother, Orland, sister-in-law, Edna Campbell, and 2 of their children. Also preceded by 3 of her children: Robert, Boni, and John Goodell; 2 grandchildren, Tina and Joseph Goodell; as well as her ex-husband, Frank Sr. Funeral services will be held at 11:00 a.m., Friday, May 22, 2020 at the Berg Orem Chapel, 500 North State Street, Orem, Utah. A visitation will be held from 10:00-10:50 a.m. prior to services. Interment, Lindon City Cemetery. Services will be recorded and uploaded to the Berg Mortuary website for those who are not able attend. Condolences may be expressed at www.bergmortuary.com.

Cara Le Campbell Goodell, age 89, passed away peacefully in her sleep May 14, 2020 where she lived at Canyon Breeze Assisted Living Center. She was devoted to her family and to the gospel of Jesus Christ. She was a woman of faith who had a... View Obituary & Service Information

The family of Cara Le Campbell Goodell created this Life Tributes page to make it easy to share your memories.

Cara Le Campbell Goodell, age 89, passed away peacefully in her...

Send flowers to the Goodell family.