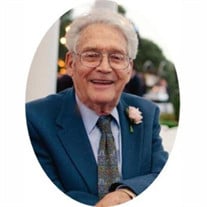 On March 25, 2021, our beloved Dixon passed away at the age of 92, in Provo, Utah. Carl Dixon Anderson was born February 5, 1929, in Mesa, Arizona. His parents were Carl Anthon Anderson, a pharmacist and part-owner of the town drug store, and Rizpah Genevieve Gibbons Anderson, an elementary school teacher, who educated Dixon in second and sixth grades. His lifelong appreciation for classical music and opera stemmed from his upbringing in a musical family, including his aunts and uncles, four of whom were music teachers. He also credited his character and love of the Gospel to his family. Dixon dedicated his life to honoring and serving God; his wife, Patricia Anne Gladys Ellis Anderson, and family; and the many communities he helped. While studying at Brigham Young University, he met Patsy, the love of his life with whom he built a family, a 67-year marriage, and a career in serving others. He had the honor of baptizing Patsy, before his mission in Mexico and Guatemala, from which he returned with a ring. Dixon and Patsy were married in the Idaho Falls Temple on December 21, 1951. Their marriage was one of laughter, compassion, and generosity. Dixon enjoyed building improvements for the home, gardening, and filling their yard with Patsy’s favorite flowers. They are the parents of five children: Ellis Dixon (Gabriela Melendez) Anderson, Dixie Gay (Robert C.) Maughan, Heidi Ann (Douglas W.) Petty, Carl Paris Anderson, and Patricia Anika Stonick. A theme underlying Dixon’s profession, devotion to the Gospel, and life was his conviction that we should strive to become better. He held himself to the highest standards in everything he did. Dixon received his Master of Arts and Doctorate in Romance Languages and Literature from The University of Texas at Austin. From there, he began a distinguished career as a professor at BYU, with highlights including serving as Chairman of BYU’s Department of Spanish and Portuguese; implementing oral proficiency testing at BYU; directing the first study-abroad program to Mexico; and writing two textbooks (Spanish in Context and ¡Háblame!) that enabled thousands of students to speak Spanish, including during their missions. Dixon recognized one of his greatest blessings as having a calling in the Church, including dutiful service as Mission President of the Argentina South Mission (1972 – 1975); Service Assignment to the Canary Islands with Patsy; Branch President in Spanish-speaking branches in Austin, Texas, and Provo, Utah; Gospel Doctrine teacher; MIA Superintendent; and Seventy and Stake Missionary. Patsy once wrote that Dixon engaged in a constant pursuit of knowing his God and being worthy to be called His friend. A true and humble leader, he inspired people to serve God with no other purpose in mind and empowered them to connect with and help others, using their talents and skills. As his colleagues remarked at his retirement, “Aunque la carrera termina, nos deja harto consuelo, su memoria,” a gift for all who knew Dixon. He is preceded in death by his wife, sister, Bonnie Anderson Milner, and his parents. He is survived by his children, 19 grandchildren, and 21 great-grandchildren. The family would like to thank the many friends who visited and the kind team at Beehive Homes Provo and Tender Care Hospice, who helped us care for Dixon. Funeral services will be held Saturday, April 10 at 11 a.m. at the Grandview 17th Ward, 1122 Grand Avenue, Provo. Friends may visit with the family at Berg Mortuary of Provo, 185 E. Center Street, on Friday, April 9, from 6 to 8 p.m. and at the church Saturday, from 9:30 to 10:45 a.m. prior to services. Interment will be in the Provo City Cemetery. Condolences may be expressed at www.bergmortuary.com Webcast is available at http://mywebcast.churchofjesuschrist.org/Player?eid=69475

On March 25, 2021, our beloved Dixon passed away at the age of 92, in Provo, Utah. Carl Dixon Anderson was born February 5, 1929, in Mesa, Arizona. His parents were Carl Anthon Anderson, a pharmacist and part-owner of the town drug store,... View Obituary & Service Information

The family of Carl Dixon Anderson created this Life Tributes page to make it easy to share your memories.