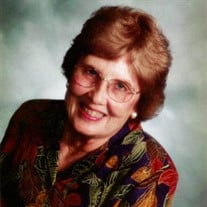 Carol Jane Schaefer Lau, wife, mother and grandmother; passed away on Sunday April 24, 2016 in Green Valley. She was born December 19, 1929, in Waterloo, Iowa to Ernest A. Schaefer and Marie Louise Ketwig Schaefer. She was the younger of two children. She married Roland Dale Lau on November 21, 1953. They were married 56 years and he passed away on July 20, 2010. They were blessed with two sons and two daughters. When Carol was two years old, her mother tragically died and when she was eight her father was killed in an auto accident. She then went to live with her aunt and uncle in Cedar Falls, Iowa. Carol attended schools in Cedar Falls and graduated from Cedar Falls High School. She went to Iowa State Teachers College after high school. She then went to work for the telephone company. It was during her work as a telephone operator that she took a call from Dale and that is when the romance started. After Carol and Dale were married they moved to Milwaukee, Wisconsin where Dale attended school there. In 1961, Carol, Dale and family moved to Colorado to further Dale’s employment. In 1989 his employment took them to Arizona. Carol, Dale and family joined The Church of Jesus Christ of Latter-day Saints in 1976. She was an active member of the church and served in many callings. She was loved and respected by all of the members. Her hobbies were collecting dolls, baking and music. Carol loved her family, especially her grandchildren. She was a great example of strength and unconditional love to her friends and family. She is survived by her two sons, Mark Lau, wife Jamie and son Cameron of Superior, Colorado and Dan Lau (Green Valley); daughter Ann Hatch, husband Gregg and daughters Jennifer and Natalie of Orem, Utah. Her husband, parents, one daughter Debra Sue, and brother Reed Schaefer, preceded her death. Carol had a viewing on Wednesday, April 27 at The Church of Jesus Christ of Latter-day Saints in Sahuarita, AZ. Graveside services will be held at 11:00 a.m., Saturday, May 14, 2016 at the Orem City Cemetery, 1500 North 800 East, Orem, Utah. Condolences may be expressed to the family at www.bergmortuary.com.

Carol Jane Schaefer Lau, wife, mother and grandmother; passed away on Sunday April 24, 2016 in Green Valley. She was born December 19, 1929, in Waterloo, Iowa to Ernest A. Schaefer and Marie Louise Ketwig Schaefer. She was the younger of two... View Obituary & Service Information

The family of Carol Jane Schaefer Lau created this Life Tributes page to make it easy to share your memories.

Send flowers to the Lau family.