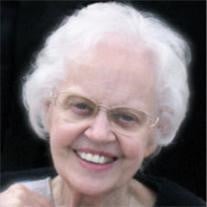 Carol ReNé Terry Harris passed away peacefully on Tuesday, September 6, 2011 in her Provo, Utah home surrounded by members of her family. Her 77 years on this earth were lived as a true follower of Jesus Christ. She leaves a legacy of tender kindness and compassion that exemplified a woman of faith. Carol was born on November 21, 1933 in Spring City, Utah to Ernest Bardell and Beatrice Leona Nordstrom Terry, the youngest of 7 children. Surrounded by love in the Terry home, she learned to work hard, have fun, develop a healthy sense of competition, and make lifelong friends. Life in the Terry home was infused with music. She learned to master the piano under her father's tutelage, a talent she used to bless others all her life. As a member of The Church of Jesus Christ of Latter-day Saints she faithfully served in many callings, her most cherished being that of a visiting teacher. While attending BYU on a music scholarship, she met Gordon Harris on a blind date. By the end of the evening she knew he was the man she would marry! They married six months later in the LDS Manti Temple and enjoyed nearly 60 years of marriage. Together they raised 7 seven children and made their home in Canada, Nevada, California, and Utah. Carol was preceded in death by her husband Gordon (2008), son, Dennis Gordon Harris (1990) and her parents, her brother Morris Terry, and sisters Faun Acord and LoRee Hickman. She is survived by her children Terry Lyn Harris Stewart (Blaine) of American Fork Utah, Julia Ann Harris Stephens (Kyle) of Las Vegas, NV, Brenda Gay Harris Kovalenko (Michael) of Marysville, WA, Bonnie Jean Harris Conger (Ray) of Orem, UT, Richard Wayne Harris (Dallas) of Highland, UT, and John Kenney Harris (Angela) of Herriman, UT, 43 grandchildren, 27 great-grandchildren, brothers Darwin, Eugene, and Golden Terry. The family would like to express sincere gratitude for so many wonderful family and friends who filled her life with joy and have been a blessing in our lives too. Funeral services will be held at 11:00 a.m., Monday, September 12, 2011 at the Grandview 9th Ward Chapel, 1555 North 1350 West, Provo. Friends may call at the Berg Mortuary of Provo, 185 East Center St., Sunday evening from 6 until 8 and at the church Monday from 9:30-10:45 a.m. prior to services. Interment will follow at East Lawn Memorial Hills, 4800 North 650 East, Provo. Condolences may be sent from www.bergmortuary.com.

Carol ReNé Terry Harris passed away peacefully on Tuesday, September 6, 2011 in her Provo, Utah home surrounded by members of her family. Her 77 years on this earth were lived as a true follower of Jesus Christ. She leaves a legacy of tender... View Obituary & Service Information

The family of Carol Terry Harris created this Life Tributes page to make it easy to share your memories.