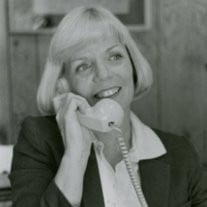 Carole Joyce Petersen passed away on August 30, 2013. She was 72 years old. She leaves behind her husband Parley and her children Mike and Pam (Young) and their respective families. Joyce was born in Salt Lake City on July 17, 1941 to Marvin and Carole Orr Wilson. Tragedy struck early in her life. When she was five years old her father was killed by a drunk driver leaving Joyce, her mother and siblings; Arlene, Pat, and Glen in desperate straits. Joyce was hospitalized for her injuries. Her mother was devastated and over the years struggled to keep the family together. Eventually she lost her children and they were placed in foster care. After several foster homes, Joyce moved to Provo to live with her Aunt Ella Jacobsen. During her stay at her Aunt and Uncles she was introduced to the Elbert and Ella Miller family and thus picked up their siblings; Marylin, Billy, Jay and Carol. She also took the Miller name and was known as Joyce Miller in her Provo days. During these years she attended and graduated from Provo High School. Joyce was popular at P.H.S. and served as Homecoming Queen in her senior year. After graduation she attended B.Y.U. for 2 years. While working at the original “Heaps of Pizza” in 1961, Joyce met Parley Petersen. The two fell in love and Joyce moved to Los Angeles to be near Parley. They were engaged in the fall of 1961 and married on May 11, 1962 in the Manti Temple. Joyce and Parley were active in the L.D.S. community in Los Angeles and attended the Wilshire Ward. While in Los Angeles, Joyce worked as a secretary for the Burns Detective Agency, learning all the gossip of the city. When Parley entered the golf business in Utah in 1963, the couple moved to Salt Lake City. Joyce quickly found employment at Lenox Industries and stayed there until her first child Mike was born in 1965. Her second child Pam was born in 1969 just prior to the family’s move to Bloomington where they helped build Utah’s First Desert Resort Community. She designed and oversaw the construction of her new home in what at the time was the Bloomington Wilderness complete with all of the desert creatures. With her lovely home completed she moved in and lovingly cared for her family; a Bloomington Pioneer. During her 30’s and 40’s, Joyce worked in the interior design field. She has “The Eye”. She established her own business “Draperies, etc.” which was successful from the outset when her husband started his career at Riverside County Club. Joyce secured a position at B.Y.U. in Public Communications Dept. She would remain on the “Third Floor” for 15 years prior to her retirement. Joyce was an active member of the church. She served in many callings usually associated with the young women. They loved her. She also enjoyed a special calling to a committee that gave input to the General Young Women’s board. She loved her savior and had a strong testimony of the restored gospel and his love for her. Joyce was blessed with numerous talents that helped her throughout her life. She was very smart, beautiful inside and out, witty and a hard worker, a fixer, terrific with people and a joy to be with. People loved her. She was an excellent seamstress and ‘baby quilt” maker. She learned how to play golf and became quite good at the “impossible game”. Joyce could do about anything she set her mind to from being a “marble shooting champ” at 7 to unbelievable loving mother and wife. She did it all. Everyone loved her and she loved them. Funeral services will be held at 11:00 a.m. Thursday September 5, 2013 at the Edgewood Chapel, 3511 North 180 East, Provo, Utah. Friends may call on Wednesday September 4, from 6:00-8:00 at Berg Mortuary, 185 East Center, Provo. There will be no viewing prior to the service. Interment will be in the Heber City Cemetery. Condolences may be sent at www.bergmortuary.com.

Carole Joyce Petersen passed away on August 30, 2013. She was 72 years old. She leaves behind her husband Parley and her children Mike and Pam (Young) and their respective families. Joyce was born in Salt Lake City on July 17, 1941 to Marvin... View Obituary & Service Information

The family of Carole Joyce Petersen created this Life Tributes page to make it easy to share your memories.