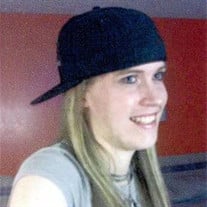 Cassie Ann Pope was born on August 14, 1985 to Lloyd and Mary Pope in Orem, Utah. She was the second girl and the fourth child of six. She graduated from Springville High School and Seminary. Cassie was a member of The Church of Jesus Christ of Latter Day Saints. While in high school she played softball, basketball and threw the shotput. She also attended UVU, where she had almost completed a Bachelor's Degree in Biology. She worked several years at Utah Valley Hospital and the last two years for Zummix in Springville where she felt loved and at home. In her free time she loved camping, fishing, water skiing, any outdoor sport, being with her family and friends and playing with her nieces and nephews. Our beautiful daughter, granddaughter, sister, aunt, cousin, and friend returned to the loving arms of our Heavenly Father on March 2rd, 2016, at the very young age of 30. Cassie was a dedicated, passionate, caring, and giving person even after her life ended. Cassie was an organ donor and was able to donate her kidneys to help two other individuals have a better life. Cassie we are so proud of you for being such a beautiful and giving soul. Cassie is survived by her parents, Lloyd & Mary; grandfather, Charles Pope; sister, Tara Pope; nephew, Cody; niece, Chloe; brother, Joshua (Angela); niece, Olivia; brother, Devan (Brooke) and nieces, Kaydance, Quincee, Travis, and Kyle (Kylie). She was preceded in death by grandparents, Reva Pope, James and Geneva Cox. Cassie you will be missed, we love you always and for eternity. Funeral services will be held at 12:00 noon, Tuesday, March 8, 2016 at the Slate Canyon Chapel, 1745 South State Street, Provo, Utah. Friends may call at the Berg Mortuary of Provo, 185 East Center Street, Monday from 6-8:00 p.m. and at the church Tuesday from 10:30-11:45 a.m. prior to services. Interment, Provo City Cemetery. We would like to thank all of the doctors, nurses, paramedics and others who worked so hard to take care of Cassie during her final hours. Condolences may be expressed to the family at www.bergmortuary.com.

Cassie Ann Pope was born on August 14, 1985 to Lloyd and Mary Pope in Orem, Utah. She was the second girl and the fourth child of six. She graduated from Springville High School and Seminary. Cassie was a member of The Church of Jesus Christ... View Obituary & Service Information

The family of Cassie Ann Pope created this Life Tributes page to make it easy to share your memories.