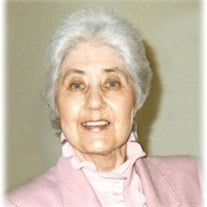 Catherine Isabel Watt Hanton, age 95, of Provo, Utah, passed away September 9, 2015 in Provo. She was born January 20, 1920 in the Lake District of northern England to William and Catherine (Kate) Carruthers Watt. After a couple of years, Cathie, her older sister Jean, and their parents returned to Scotland. When Cathie was 5, her family moved to Windsor, Ontario, Canada, and then a few years later to Detroit, Michigan. She did well in school and enjoyed participating in school plays and tennis. After graduating from high school and a secretarial business course, she worked as a private secretary for the chief metallurgist at Cadillac, a division of General Motors. A small act of kindness on her mother’s part made a big difference in her life. Kate Watt volunteered to teach Maria Hanton how to crochet, and Maria’s youngest son, Jack, accompanied Maria to the Watt home – the rest is history. Jack took Cathie to plays and musicals, treated her to waffles and ice cream, took her to Belle Isle, and quickly stole her heart. Jack and Cathie were married 22 January 1943 in Detroit, Michigan, and they spent a happy nearly-70 years together. Keeping up with two boys kept her busy – teaching Sunday School, being a Cub Scout Den Mother, driving her boys to music lessons, taking them to tour a nuclear power plant, and other educational activities. In the community she was active in the Garden Club, AT Club (The About Town Club), and served as President of the Women’s Auxiliary of the Livonia Youth Symphony. After her family, her greatest loves were gardening and spending time at the beach, soaking in the sun or jumping in the waves. When Jack retired, they enjoyed traveling and spending time at the beach. In 2010, she and Jack moved to Maryland to be closer to Bill and Peggy. After a year in Maryland, they moved with Bill and Peggy to Utah. She is survived by her sons Jack and Bill (Peggy), grandchildren Philip, David, Andrew (Denise), Bethany (Paul) Lundgreen, Justin (Bonnie Jean), and Brianna, as well as nine great-grandchildren. She is pre-deceased by her husband, one grandchild, and her sister. Funeral services and interment will be held on Saturday,September 26 at Fred Wood Funeral Home, 36100 Five Mile Road, Livonia, Michigan 48154. Friends may call from 9-10:00 a.m. prior to services. Condolences may be extended to the family at www.bergmortuary.com.

Catherine Isabel Watt Hanton, age 95, of Provo, Utah, passed away September 9, 2015 in Provo. She was born January 20, 1920 in the Lake District of northern England to William and Catherine (Kate) Carruthers Watt. After a couple of years,... View Obituary & Service Information

The family of Catherine "Cathie" Watt Hanton created this Life Tributes page to make it easy to share your memories.

Send flowers to the Hanton family.