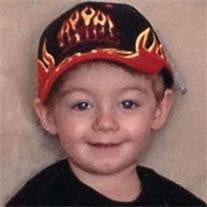 Chanse Bryson Drew was suddenly and tragically taken from us on Sunday, June 9, 2013. Chanse was born October 14, 2010 to Breanne Whitney Christensen and Bryson August Drew. Chanse loved life and especially loved playing with his little brother Kayson. Chanse was taken from us way too soon and we will miss his playful personality and charming smile. We will embrace the memories each of us has for the little man Chanse was and be left to wonder what a great man he would have become. It is with sadness in our hearts that we say goodbye to our "little man". He leaves behind a loving mother, brother, grandparents, great-grandparents, great-great-grandparents, uncles, aunts and cousins. Chanse is survived by his mother, Breanne Whitney Christensen, Payson; brother Kayson Leon Christensen, Payson; and grandparents Brian L. (Shauna) Christensen, Las Vegas; Tammy (Brian) Smith, Spanish Fork; Delbert Drew, Orem; Teresa August, Riverton. Graveside services will be held at 11:00 a.m., Friday, June 14, 2013 at the Provo City Cemetery, 610 South State Street, Provo, Utah. Friends may call at the Berg Mortuary of Provo, 185 East Center Street, from 9:30-10:30 a.m. prior to services at the cemetery. Condolences may be sent through his obituary at www.bergmortuary.com. Donations may be made at any Wells Fargo Bank under "Chanse Drew Benefit Donation Fund".

The family of Chanse Drew created this Life Tributes page to make it easy to share your memories.

Chanse Bryson Drew was suddenly and tragically taken from us...

Send flowers to the Drew family.