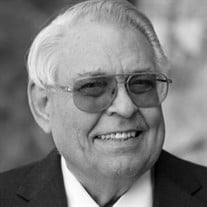 Charles “Chuck” McArthur Cox, the patriarch of our family, joined his beloved wife, Eleanor Anne Cox, in the early morning hours on September 8, 2014 in Provo, Utah at age of 83. He served others selflessly, loved others deeply, and will be missed dearly by his family and friends. Chuck was born in Provo, Utah on May 8, 1931, the son of Charles Holman Cox and Helen McArthur. His father was involved in the steel industry and Chuck worked side-by-side with his dad from the time he was a young boy. The Cox family briefly lived in Fontana, California, before moving back to Provo. Chuck placed great value on higher education. He attended both Brigham Young University grade school and BYU High School, and graduated from Provo High. He graduated from Brigham Young University earning a bachelor of science in Mechanical Engineering. He went on to earn an MBA from Harvard (1961) and a PhD from The University of Washington (1978). Chuck played football for BYU for one year before his mission for The Church of Jesus Christ of Latter-day Saints in Toronto, Canada. He returned to BYU to finish his degree before he enlisted in the Navy and Officer Candidate School at Port Hueneme in Ventura, California, after which he served in the Judge Advocate Corp. Chuck married his college sweetheart, Eleanor Anne Boucher, on November 25, 1959 in the Salt Lake Temple, and were married for more than 50 years before she passed in 2011. Together they raised four children, Chip, Rick, Janet, and Craig. The family lived in San Jose and Sacramento, California where Chuck worked for the defense industry. They returned to Provo in the mid-1960’s when Chuck briefly helped his father run a foundry, and stayed to teach finance at BYU. When Chuck accepted a full-time position with Business School faculty at BYU, he returned to school at the University of Washington in Seattle for his PhD. The 'Seattle years' were a wonderful time for Chuck and his family, which was a good thing because after returning to BYU, the U of W scheduled him to teach each spring for a number of years, which Chuck really enjoyed. When BYU MBA students were asked in a survey five years after graduating which professor had most influenced them to be successful at work, Chuck was named as often as any other professor. His caring, sincere, deliberate way of thinking and relating conveyed the difficulties of working hard to address issues that have no ready solutions. It's what made him a wonderful, loved father as well. After he retired from full-time teaching at BYU, Chuck continued teaching in the continuing education department of BYU through 2012. Chuck was an active member of The Church of Jesus Christ of Latter-day Saints and served in various Priesthood callings in the Wards and Stakes in which he lived. Chuck and Anne served a teaching mission in Beijing, China in 1998-1999 where they both taught at the Foreign Affairs College, China's diplomacy school. After his mission, he continued to travel with Anne, family, and friends as often as possible. In his later years, Chuck loved genealogy research. He was passionate about this work and tracking down lost family members through historical and DNA connections. His work was the conversation piece over many meals and phone conversations. Friends and family were paramount to Chuck. He loved being of service, helping others with computers, genealogy questions, or whatever was troubling them. Chuck welcomed calls at any time of the day. Chuck's sincerity, abilities, generosity, and willingness to help and love will guide his children and grandchildren whom he loved very much for the rest of our lives. Chuck is survived by his four children: Charles B. (Chip) Cox (Shauna), San Ramon, California, Richard H. Cox, (Yvette), West Jordan, Utah, Janet Elle Cox, Coronado, California, and Craig R. Cox (Joni), Chicago, Illinois; eight grandchildren: Matt, Justin, Rachel, Ali, Austin, McKenna, Walker and Blake and one great grandchild, Macie. He is also survived by his beloved Wilson and McArthur nephews, nieces and cousins. Funeral services will be held at 11:00 a.m., Friday, September 12, 2014 at the Edgemont North Stake Center, 4560 Canyon Road, Provo, Utah. Family and friends may call at the Berg Mortuary in Provo, 185 East Center Street, on Thursday, September 11, from 5:30 until 8:00 p.m., and at the church on Friday prior to services from 9:30 to 10:45 a.m. Happy stories may be sent to the family through www.bergmortuary.com.

Charles &#8220;Chuck&#8221; McArthur Cox, the patriarch of our family, joined his beloved wife, Eleanor Anne Cox, in the early morning hours on September 8, 2014 in Provo, Utah at age of 83. He served others selflessly, loved others deeply,... View Obituary & Service Information

The family of Charles "Chuck" McArthur Cox created this Life Tributes page to make it easy to share your memories.

Charles “Chuck” McArthur Cox, the patriarch of our family, joined...

Send flowers to the Cox family.