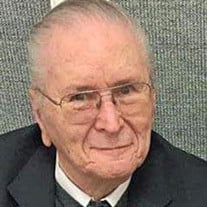 Charles Alfred Henson (Chuck), age 88, passed away peacefully in his home on September 16, 2018. He was born August 14, 1930 in Santa Ana, California, to Alfred Marion Henson and Anna Henson (Waite). He married the love of his life and soul mate Patty Lou Henson (Klotz) on July 29, 1951 in Council Bluffs, Iowa; where he was serving his country in the United States Air Force. They later moved to Provo, Utah, where they were sealed in the Salt Lake Temple in April of 1953. He attended and began his career as a professor at Brigham Young University. He continued his education while teaching and earned his Masters and Doctorate degrees. He was True Blue and loved following all BYU sports; he even designed and built Cosmos (their mascot) head. He was very active in local politics and served on the planning commission, two terms on the Provo City council, where he was very influential in bringing the East Bay development to Provo among many other projects. He also served as Republican County Chairman. He was very active in The Church of Jesus Christ of Latter-day Saints and served in callings in both his stake and ward. He is survived by his wife, Patty, his sons Steve, Mark (Tina), Bryan (Brenda), Scott (Dede), and his daughter Lori, 9 grandchildren, and 17 great grandchildren. He was preceded in death by his parents, two brothers, son David, and granddaughter Tiffiney. Funeral services will be held at 11:00 a.m., Tuesday, September 25, 2018 at the Bonneville 10th Ward Chapel, 1498 East 800 South, Provo, Utah. Friends may call at the Berg Mortuary of Provo, 185 East Center Street, Monday, September 24 from 6-8:00 p.m. and at the church Tuesday from 9:30-10:30 a.m. prior to services. Interment and dedication of grave will be held at Provo City Cemetery following services. Condolences may be expressed at www.bergmortuary.com.

Charles Alfred Henson (Chuck), age 88, passed away peacefully in his home on September 16, 2018. He was born August 14, 1930 in Santa Ana, California, to Alfred Marion Henson and Anna Henson (Waite). He married the love of his life and soul... View Obituary & Service Information

The family of Charles "Chuck" Alfred Henson created this Life Tributes page to make it easy to share your memories.

Send flowers to the Henson family.