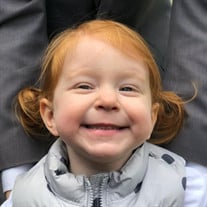 Our dear sweet Chelsea Parkinson was born early September 6, 2015 to Reed and Caitlin (Katie) Parkinson. Her dad was in school out of the country and couldn’t get here until the next day. He was so happy and proud to finally hold her. When she was old enough to fly, her and mom joined up with her dad in Medical school. When she was a little baby her grandpa “Papa” called her Chel-serious for her serious study like glare. The more she grew the more she smiled, laughed, and loved to play. Chelsea needed only a minute to light up a room with either a song sung from memory, a story she made up as she went (which usually included the big bad wolf), or her infectious laughing. Having moved around during medical school Chelsea made so many little and big friends, from California to Utah, Arizona, Colorado, Georgia, Toronto Canada, Dudley England, and Granada. She captured hearts no matter where she went. Nursery leaders loved her, Library personnel loved her frequent visits, and family adored her. Chelsea loved life and her family. She would introduce them to everyone especially her little baby sister Sophie. Her dad was her hero and she was his princess. They were inseparable when he was home. She loved playing at the park, swimming at the pool, Playdoh, painting, pretending to cook for whoever would try it, bugs, petting zoos, and the Aquarium. Something that was so beyond her years was her gratitude for whatever thing she was given, no matter how small or simple. Whether indoors or exploring outside it was an adventure. On April 15, 2018 she was taken to the loving arms of her Heavenly Father and her grandma Mavis. We will so miss our little nugget. She is survived by her parents, Reed and Caitlin Parkinson; sister, Sophie; and grandparents, Doug (Waldine) Fallon and Dr. Richard Parkinson. She was preceded in death by her grandmother, Mavis Parkinson. Funeral services will be held at 11:00 a.m., Saturday, April 28, 2018 at the Edgewood Ward Chapel, 3511 North 180 East, Provo, Utah. A family gathering will be held at 10:30 a.m. prior to services. Interment, Provo City Cemetery. Condolences may be expressed to the family at www.bergmortuary.com.

Our dear sweet Chelsea Parkinson was born early September 6, 2015 to Reed and Caitlin (Katie) Parkinson. Her dad was in school out of the country and couldn&#8217;t get here until the next day. He was so happy and proud to finally hold her.... View Obituary & Service Information

The family of Chelsea Parkinson created this Life Tributes page to make it easy to share your memories.

Send flowers to the Parkinson family.