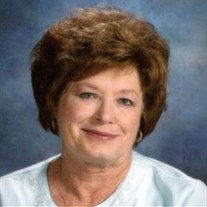 Christie Ann Bennett Singleton gained her wings on March 8, 2019. Born December 3, 1945 to Lloyd Dean Bennett and Gwen Preston Bennett. She was the oldest of six children. She spent her younger years in American Fork, Utah. She graduated from Provo High School in 1964. She married her high school sweetheart, Mike Singleton, November 10, 1967 in the Manti Utah Temple. They had three children and made a wonderful life together. She loved children and served the Provo school district as a lunch lady. She worked for several years at Franklin Elementary School as the kitchen manager. After her retirement in 2006, she missed the children so much that she returned to be a one-on-one reading aide. Mom was a very dedicated and hard working person, she worked hard helping her husband build and run two family businesses: Singletons Tax Service, and Singletons Boat Camp. Christie was a member of the Daughters Utah Pioneers. Mom dedicated herself to her family, always making us her number one priority, attending grandchildren’s activities, acting as an unbiased mediator, and just plain showering everyone with love. She loved to go bowling, and was in a bowling league for many years. Mom was blessed with many lifelong friendships that meant the world to her. In her later years, she enjoyed Sunday night popcorn dates with her most loyal companion “Millie.” Christie was an amazing woman, always finding the good in everyone she met−there was not a selfish bone in her body. She will be greatly missed by many. Christie is survived by her daughters, Lisa (Gary) Krell, Jodi (Kevin) Greenhalgh, and a daughter-in-law, Amy Singleton. Christie leaves behind 5 grandchildren, and two great-grandchildren that worship the ground she walked on, as well as her beloved brothers and sisters, Paulette (Ralph) Childs, Suzzanne (Wayne) Crabb, Craig (Colleen) Bennett, Kenneth (Marcie) Bennett, and Robert (Shelly) Bennett. She is also survived by a brother-in-law, Keith Singleton, and a loving aunt, Bonnie (James) Shelton. She was preceded in death by her parents as well as her loving husband, son, Samuel Clay Singleton, and grandson, Sammy Singleton. Funeral services will be held at 11:00 a.m., Friday, March 15, 2019 at the Pioneer Park Ward, 610 West 300 South, Provo, Utah. The family will receive friends at the church on Thursday, March 14 from 6-8:00 p.m. and on Friday from 9:30-10:45 a.m. prior to services. Interment, Provo City Cemetery. Condolences may be expressed at www.bergmortuary.com.

Christie Ann Bennett Singleton gained her wings on March 8, 2019. Born December 3, 1945 to Lloyd Dean Bennett and Gwen Preston Bennett. She was the oldest of six children. She spent her younger years in American Fork, Utah. She graduated from... View Obituary & Service Information

The family of Christie Ann Bennett Singleton created this Life Tributes page to make it easy to share your memories.

Send flowers to the Singleton family.