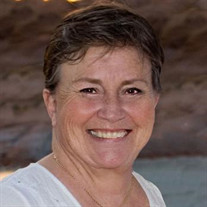 On July 26, 2015, Christine Clark Pope passed away peacefully in her home surrounded by her husband, all her children and her grandchildren. She was 67 years old. Chriss was an example to everyone around her and was a faithful follower of Christ her whole life. She lived up to her covenants, and truly was a doer of the word. She will remain the heart of her family and her legacy of faith, family and tradition will continue forever. She was born in Provo, Utah on June 7, 1948 to her parents Don Schow Clark and Marion Bee Larsen Clark, both of which preceded her in death. She was given the name Christine after her great grandmother who was the first convert to the church, but much preferred the name Chriss (adding the extra S herself!). She was the oldest daughter of 8 children. She is survived by all of her siblings, Steven (Cindy) Clark, Tom (Gwen) Clark, Liz (David) Lambert, Jim (Judy) Clark, Dave (Lisa) Clark, Jeff Clark, and Cindy (Norm) Nemrow. Chriss and her husband Louis McConkie Pope were high school sweethearts. She graduated from Provo High in 1966. She and Louis were engaged before he set off as a missionary for the Church of Jesus Christ of Latter-day Saints. Twenty-six days after Louis’ return, they were married in the Salt Lake Temple on February 27, 1969. Eleven months later, Chriss was in labor pains with her first child while taking her last exam to earn her undergraduate degree in Home Economics at Brigham Young University. The relationship between Chriss and Louis was that of true love story. They supported each other with equal favor. Chriss supported Louis in everything he did, from starting a new company when they had nothing, to moving to Africa to further his humanitarian projects. The Pope children never doubted how much their parents loved each other. Over the last year, Louis took great pleasure in caring for Chriss full time with her cancer and was a wonderful example of a loving and devoted husband. He will truly miss his best friend and companion. Chriss is survived by all of her children, Lisa (Troy) Holmberg, Louis “Sonny” (Krista) Pope, Eric (Laurie) Pope, Jeff (Wendy) Pope, and Natalie (Jason) Fairbourne. Her children were her greatest joy and pride. More so were her 21 grandchildren who all felt love from their grandma and will miss her so much. Chriss was the heart behind all the family traditions that the Pope family enjoys. Watching the fireworks on the 4th of July, sitting on Santa’s lap at the Christmas party, or eating a great meal on top of the houseboat at Lake Powell were all because of Chriss. Chriss happily accepted any calling extended to her as a member of the Church of Jesus Christ of Latter-day Saints, from the Young Women’s President, the gospel doctrine teacher to the librarian. She treated them all with equal ambition and devotion. She dubbed the family theme “Pope’s are participators” and never let her children miss a sacrament meeting, ward service project, or mutual activity. Her three sons will all concur that mom earned herself three Eagle Scout Awards. Chriss will be remembered for her charismatic, no nonsense personality. No one ever questioned how Christine felt! She had a beautiful smile and glow. She loved her garden and her flowers. She also loved to cook and had no problem putting together an amazing meal for a big crowd. She really knew how to get things done and never did anything halfway. So many people benefited from her talents, including her shopping talent. She hated to see others without, and was willing to open her home and share everything she had with her family and her neighbors. She left an amazing example for her children and her grandchildren. Her family is grateful for the knowledge of the plan of salvation and the redemptive power of Jesus Christ. They will look forward to the day when they can be reunited; she will be greatly missed. Chriss will be buried in the Provo Cemetery at 2pm on July 28, 2015. The family will hold a public memorial service in the Grandview 6th ward LDS Chapel located at 1550 North 1880 West Provo on Friday, July 31, 2015 at 11 am. Shortly thereafter, friends and family will gather at the home of Sonny and Krista Pope located at 1682 North 1880 West, just next to the church for open house reception. Condolences may be extended to the family at www.bergmortuary.com.

On July 26, 2015, Christine Clark Pope passed away peacefully in her home surrounded by her husband, all her children and her grandchildren. She was 67 years old. Chriss was an example to everyone around her and was a faithful follower of Christ... View Obituary & Service Information

The family of Christine "Chriss" Clark Pope created this Life Tributes page to make it easy to share your memories.