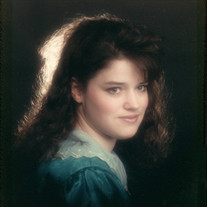 Christine Marie Mitchell was born in Castro Valley, CA, on February 4, 1969, to Sheila S. and Gary K. Mitchell. She passed from this life at her home in Provo, UT, at the age of 49, on April 8, 2018. She will be tremendously missed by her family and friends. Sweet memories will remain of her kind, generous, loving, and genuinely caring nature. Christine was welcomed to the world with much excitement by her parents and four older brothers and she brought them so much joy. Her mom was ecstatic to have a daughter at last. Her brother, Todd, who is two years her senior, regarded her as his "gift" and treated her so very gently. Older brothers Tom, Denny, and Jeff also embraced her tenderly as their only sister. That warm relationship with her siblings continued throughout her lifetime, mostly via modern technology and social media in the later years. As she grew up, Christine's secular education began in Castro Valley and Redding, CA, and then in local Utah schools. She loved attending Wasatch Elementary, Dixon Jr. High, and Cardon Lee Schools in Provo. She attended classes at BYU and UVCC as well. She loved her work. She was employed by Walker Oil Company for many years and for the past four years and at the time of her death worked for Rhinehart Oil. She was a dedicated employee. Her spiritual education began as a Catholic and since 1971 in LDS wards in CA where her mom and brothers were new converts. It continued at home and in the Oak Hills 5th Ward of the Sharon East and Oak Hills Stakes where she was baptized and confirmed a member of The Church of Jesus Christ of Latter-day Saints. Christine married Steve Baumgarten, but they later divorced. Her dogs were her children. Her vanilla cocker spaniel, Bailey, and blue-eyed, chocolate cocker spaniel, Tucker, were her pride and joy and she was lovingly devoted to their care. She had many lasting and loving friendships. Christine is survived by her mom, Sheila S. Lovely Mitchell, her dad, Gary K. Mitchell (Linda), her brothers, Thomas K. (Reneé), Dennis R., Jeffrey M., and Todd A. Mitchell, 13 nieces and nephews, five grand nieces and nephews, and a multitude of aunts, uncles, and cousins. She was preceded in death by her beloved Lovely and Mitchell grandparents, two nephews, and some dearly missed aunts, uncles and cousins. Her dog Tucker passed away in March and 19-year-old Bailey shortly after Christine's death. Funeral services are scheduled for Saturday, April 21, 2018, 11:00 a.m., at the Hillside LDS Chapel, 1960 N 1500 E, Provo, UT 84604. A visitation will be held prior to the funeral from 10:00-10:50 a.m. at the same location. Burial will be at Eastlawn Memorial Hills Cemetery. In lieu of flowers, please contribute to your favorite humanitarian organization. Condolences may be expressed at www.bergmortuary.com.

Christine Marie Mitchell was born in Castro Valley, CA, on February 4, 1969, to Sheila S. and Gary K. Mitchell. She passed from this life at her home in Provo, UT, at the age of 49, on April 8, 2018. She will be tremendously missed by her family... View Obituary & Service Information

The family of Christine Marie Mitchell created this Life Tributes page to make it easy to share your memories.