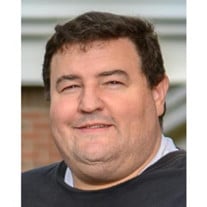 Beloved husband, father, son, and brother, Christopher Ryan Wilkinson (47) returned to his Heavenly home Tuesday, January 11, 2022 after a brief illness. Chris was born October 19, 1974 in Provo, Utah. He was the oldest of six children born to Ronald Boyd Wilkinson and Jennifer Patrice (Wood) Wilkinson. During his early years, his military family made several moves, mainly in the southeastern United States with a memorable three years spent in Okinawa, Japan. His family finally settled in North Carolina when his father retired. Chris was mathematically gifted and attended the North Carolina School of Science and Math during the 11th grade. He enjoyed wrestling throughout high school, and he graduated from East Burke High School in Icard, North Carolina. He was also active in scouting and earned his Eagle Scout. Chris was an active member of The Church of Jesus Christ of Latter-day Saints and served a two-year mission in Roseville, California after high school. He served in many callings over his life and enjoyed music and loved to play piano for children’s primary. After his mission, Chris attended Brigham Young University where he received a degree in Information Technology. Chris was also gifted with computers from a very young age and fascinated by the mechanics of all technological devices. He turned his passion into a career as a systems engineer and database administrator. He also taught networking and server administration courses for several years. He was always willing to help people with computer problems and was the go-to computer fixer in the family. While attending BYU, Chris met and married Sally Elaine Jacob of Provo, Utah. They were sealed in the Salt Lake Temple on June 28, 2003 and became the parents of four beautiful children. Chris was completely, with his whole heart, devoted to his wife and children. He loved to go on long drives with his family, seeing the mountains and surrounding beauties of nature, singing in the car as they drove. He loved to do math with his daughters and tease and joke with his kids, telling them his favorite Dad jokes. He loved playing games with his family and spending time getting little treats and times when they were all snuggled together. Chris is preceded in death by his grandparents on both sides, both his parents, and his infant son, Oliver. Chris is survived by his wife Sally, daughters Olivia and Calleigh, and son Nicholas. He is also survived by his stepfather Kevin Porter and his five siblings Rebekka Wilkinson, Nathaniel Wilkinson (Demi), Elisabeth Taylor (Mark), Clinton Wilkinson, and Katharine Christensen (Ryan), as well many nieces and nephews. We encourage Chris’s friends and family to leave loving messages that his wife and children will be able to treasure on Berg Mortuary’s online Tribute Wall at https://www.bergmortuary.com/obituaries/Christopher-Wilkinson-2/#!/TributeWall. The family is asking that in lieu of flowers, donations be made to help his wife with funeral costs through GoFundMe at https://gofund.me/eed5ea48 or at Ryan Christensen’s (brother-in-law) Venmo account @Ryan-Christensen-00. Funeral services will be held at 11:00 a.m., Saturday, January 22, 2022 at the Yellow Sage Ward Chapel, 5017 West Grand View Peak Drive, Riverton, Utah. Friends may call from 9:30-10:45 a.m. prior to services. Following funeral services, Chris will be laid to rest at Orem City Cemetery. For those unable to attend the funeral in person, the following link may be used to watch a livestream of the services: https://zoom.us/j/96845228871?pwd=K3NPczIzM1g0VnNWMkpsa0tEVk92Zz09.

The family of Christopher Ryan Wilkinson created this Life Tributes page to make it easy to share your memories.

Send flowers to the Wilkinson family.