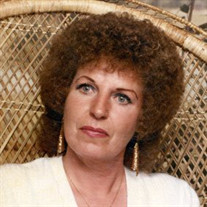 Clara Norreta “Rita” White Caine passed away in Green River, Wyoming, on October 4, 2014. She was born August 20, 1937, to Charles J. and Purcie Minnie Curtis White in Provo, Utah. Rita attended Provo schools. Rita was married to Richard John Caine for many years; they later divorced. She retired at an early age and spent the rest of her life as a homemaker. She loved her daughters with all her heart. Rita had numerous hobbies and talents, including cross stitching and painting. She also loved playing computer games. She loved her grandchildren and great-grandchildren dearly and loved to play cards with them. She is survived by her daughters, Debora Jo (Brent) Harper, Green River, Wyoming and Donna Jensen, Salt Lake City, Utah; 4 grandchildren; 9 great-grandchildren and brother, Jay White, Riverton, Wyoming. She is preceded in death by her parents; sister, Carol Parker and grandson, Brandon Jensen. Graveside services will be held at 2:00 p.m., Wednesday, October 8, 2014, at East Lawn Memorial Hills, 4800 North 650 East, Provo, Utah. Friends may call at Berg Mortuary of Provo, 185 East Center Street, Wednesday afternoon from 1-1:45 p.m. prior to services at the cemetery. Condolences may be sent online at www.bergmortuary.com.

The family of Clara Noretta "Rita" White Caine created this Life Tributes page to make it easy to share your memories.

Send flowers to the Caine family.