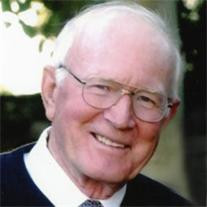 When Lilacs Last in the Dooryard Bloom'd The great star early droop'd in the western sky in the night, (we) mourn'd, and yet shall mourn with ever-returning spring. May 16, 2013 ended a journey of selflessness and devotion for our much-loved father, grandfather and husband. Clinton Dean James never desired accolades or honors but lived a life of simple, faithful assistance and taught his family the gift of honorable work and the importance of one's heritage. Born March 26, 1929 to Willis and Lorena James of Provo. His growing up during the Great Depression taught him the value of work as well as the simple pleasures of good friends and was blessed by those same friends as they visited him in his illness for which the family is most grateful. He married his sweetheart Elaine Argyle on March 19, 1952 but was immediately deployed to serve in the Korean War. Upon his honorable discharge from the Army, their marriage was solemnized on November 12, 1954 in the Idaho Falls temple. Dean served on the Provo City Police department until his retirement in 1983. Afterwards, he was employed with the Provo School District using his craftsmanship in the cabinet making shop. He spent many years working side by side with his wife and family and blessed their lives in countless ways. Dean was diagnosed with Myelodysplastic Syndrome, or MDS (a precursor to leukemia) in 2010 and patiently waited upon the Lord when his MDS developed into acute leukemia September 2012. Conceding his time was fleeting, he returned to the love and care of family and friends under hospice care. Only in such times as this is the most genuine love demonstrated and the family owes its deepest gratitude to Delaina Bonnett (daughter) and Karen James (daughter-in-law) for their countless hours of devotion as they sacrificed so much to care for our father and grandfather in his illness. Their errand of angels was earnest and exemplary to all. Our family wishes to extend our deepest gratitude to the doctors, nurses, and staff of the Huntsman Cancer Institute and Hospice for Utah for their kind care and attention in his dire time. Our family also extends our sincere appreciation to those neighbors, friends, and ward members who took such good care of our parents always letting them know they were never forgotten. Dean was grateful to have love surrounding him at all times in his final days on this earth. He was a sensitive, humble man who possessed a strong belief in prayer, faith and hard work. His life was spent in determined service to his family, friends, and neighbors. Many recall his tireless efforts when help was needed. He took great pride in and was faithful to his handcart pioneer ancestors who made the ultimate sacrifice for their faith. He taught by word and example of his faith in Christ and His kingdom. He was a faithful High Priest in the LDS church and honored his various callings. He is survived by his beloved wife Elaine, sons: Dennis (Chris), Cecil (Karen), Kyle (Lorraine) and daughter Delaina Bonnett (Bud), thirteen grandchildren and eleven great-grandchildren. He is preceded in death by his father Willis, mother Lorena, brothers Frank, William, Kenneth and John; and sisters Blanche and Leah. Funeral services will be held at 11:00 a.m., Tuesday, May 21, 2013 at the Berg Drawing Room Chapel, 185 East Center Street, Provo, Utah. Friends may call at the mortuary Monday from 6-8:00 p.m. and Tuesday from 9:30-10:45 a.m. prior to services. Interment, Provo City Cemetery. Online condolences may be shared with the family through his obituary at www.bergmortuary.com. Comrades (ours) and (we) in the midst, and their memory ever to keep, for the dead (we) loved so well, For the sweetest, wisest soul of all (our) days and lands—and this for his dear sake. When Lilacs Last in the Dooryard Bloom'd - Walt Whitman

When Lilacs Last in the Dooryard Bloom'd The great star early droop'd in the western sky in the night, (we) mourn'd, and yet shall mourn with ever-returning spring. May 16, 2013 ended a journey of selflessness and devotion for our much-loved... View Obituary & Service Information

The family of Clinton James created this Life Tributes page to make it easy to share your memories.

When Lilacs Last in the Dooryard Bloom&#39;d
The great star early...

Send flowers to the James family.