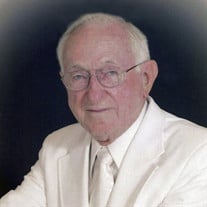 Coleman Lilley McVea died peacefully in his home in Provo, Utah at age 93 on 15 July 2014. Born 14 August 1920 on a dairy and cattle farm north of Baton Rouge, Louisiana to Thomas Scott McVea and Grace Lilley Pettit McVea, he was the fifth of seven children. He was a devout Christian with all the qualities of a southern gentleman, greatly respected by all who knew him for his integrity, wisdom, reliability, and deep devotion to his family, his country, and his God. Coleman graduated from Baker (Louisiana) High School where he was voted “Most Valuable Man” in school athletics and was superior in academics. He graduated from Louisiana State University at Baton Rouge, Louisiana in 1943 with a Bachelors Degree in Chemical Engineering. At the same time he completed advanced training in Reserve Officers Training Corps (ROTC). In 1943, after Officers Training School at Fort Benning, Georgia, Coleman was assigned to the 37th Infantry Division 129th Infantry Regiment Company H in the Asiatic-Pacific Theatre. He spent two years fighting the Japanese forces in the Solomon Islands, Bougainvillea, and participated in the liberation of the Philippine Islands and recapturing of Manila. During these campaigns Lt. McVea was awarded the Bronze Star Medal Award three times for “meritorious achievement … against the enemy.” After his promotion to First Lieutenant, his unit was among those preparing to invade Japan on JV Day, 14 August 1945, his 25th birthday. He returned home in December of 1945 and later served as a Captain and Commanding Officer in a Quartermaster Reserve Unit in Baton Rouge, Louisiana. He continued for the rest of his life to be a strong supporter of his country and the cause of freedom assured by the U.S. Constitution. He was hired by Esso Refining Co. (now Exxon/Mobil) in 1946 as a chemical engineer and served in several management positions for 25 years. He served in many political and citizenship development education groups and on civic boards and committees for the city of Baton Rouge as a Professional Engineer. Coleman married Eleanor Lobdell of Baton Rouge, Louisiana on 18 October 1946 in Baton Rouge and had six children. The family joined The Church of Jesus Christ of Latter-day Saints in 1965, and they were active in many church callings and activities in Baker, Louisiana. In 1970, he moved his family to Provo, Utah where he received a Civil Engineering degree from Brigham Young University in Provo and taught briefly at BYU. He also spent many years as a real estate developer in Orem, Utah. He remained an avid and devoted LSU and BYU fan for the rest of his life. He and Eleanor served faithfully in many church callings in the Provo Edgemont South Stake as well as five full-time missions together in Mississippi and San Diego. They served many years in the Baton Rouge and the Provo LDS Temples. Coleman was preceded in death by his parents, two siblings who died young and four brothers and sisters-in-law all of Louisiana. He is survived by his beloved wife, Eleanor, and their six children, Ellen Loveland (Alan), Anne Kendall (Rodney), Virginia Tate (Terry) all of Orem, Utah and Coleman Jr. (Valli) of Provo, Utah, Sarah Hall of Oro Valley, Arizona, and Russell (Peggy) of Salt Lake City, Utah. He is also survived by 26 grandchildren and 41 great-grandchildren and was excitedly awaiting the birth of his first great-great- grandchild in September. The family wishes to thank all who cared for him especially the nurses and CNAs from Hearts for Hospice and Home Health. Funeral services will be held at 11:00 a.m., Monday, July 21, 2014 in the Edgemont South Stake Center, 2950 North Canyon Road (350 East ), Provo, Utah. Friends may call at the Berg Mortuary of Provo, 185 East Center Street, Sunday, July 20 from 6-8:00 p.m. and at the church Monday from 9:30-10:45 a.m. prior to services. Interment with full military honors will follow the funeral at 2:00 p.m. at the Utah Veterans Memorial Park & Cemetery, 17001 Camp Williams Road, Bluffdale, Utah. Condolences may be sent online at www.bergmortuary.com. In lieu of flowers, the family suggests contributions be made to the Coleman McVea Scholarship Fund at Brigham Young University, Provo, Utah; the Young Family Cemetery in The Plains, Louisiana; or any military veterans organization.

Coleman Lilley McVea died peacefully in his home in Provo, Utah at age 93 on 15 July 2014. Born 14 August 1920 on a dairy and cattle farm north of Baton Rouge, Louisiana to Thomas Scott McVea and Grace Lilley Pettit McVea, he was the fifth... View Obituary & Service Information

The family of Coleman Lilley McVea created this Life Tributes page to make it easy to share your memories.

Send flowers to the McVea family.