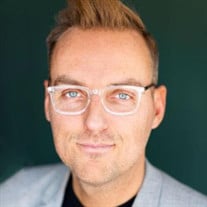 Collin Stanley Kartchner of Pleasant Grove, Utah suddenly and unexpectedly passed away October 20, 2020 surrounded by family. The cause of death is still unknown, but believed to be an undiscovered medical condition. He was born July 29, 1980 in Utah. Collin lived as vibrantly as sunshine itself. He brought joy to his family every day of his earthly life, and everywhere he went trailed with laughter and smiles. Collin graduated from Timpview High School in 1998 where he met his sweetheart and love of his life, Elizabeth Brown, and took her on her very first date. They married after his LDS service mission to Taipei, Taiwan and he went on to graduate from BYU. They have four beautiful children: Avery (14), Quincey (12), Lola (9) and Myles (7). Collin was a devoted husband, father, and devout follower of Christ. Collin lived every day to bring love, laughter, hope and joy to all. He was a loving father figure and friend to any and all who needed extra love and hope in their lives. He lived a life of service and generosity and no one was below his radar. It was not uncommon to have him pull over the car, stop to talk to a stranger, and quickly become their friend and champion. He stopped at every lemonade stand to support little entrepreneurs all over the country, overpaying for every cup. His acts of quiet service and charity far outnumber any public ones, but he raised hundreds of thousands of dollars in the U.S. for Hurricane Harvey victims, cancer patients, and orphans who were devastated in Puerto Rico by Hurricane Maria. He created encouraging billboards to inspire Utahns to spend less time with their phones and more time with their kids. He turned his enormous heart and hilarious wit into his career of public speaking. He was most passionate in his fight to share the harmful effects of social media and smart phones for children, teens and adults. He traveled all over the country giving his moving presentations, 500 assemblies and firesides per year in schools and chapels. Find his life’s work and message at savethekids.us, his TedX talk, and @collinkartchner on social media. Collin was a true visionary! He was an emotional alchemist who could touch any heart, facing any darkness, and turn it into gold, smothered in hope, with a dash of laughter. He changed and even saved the life of so many, he was the voice of love and reason this world so badly has needed. After every presentation he would stay as long as it took to give the line of attendees his famous 8 second hug. He taught us all that to #savethekids we must first #savetheparents, and that being a good parent was 98% putting your phone down. He is survived by his eternal companion, Elizabeth Kartchner; their four children; his parents, Kelly Dean Kartchner and Katelon Rey-Gilbert. His brothers and sisters, Chad (Keira) Kartchner, Charity Adams (Tim), Emily (Russ), Bethany (Lauren) Kartchner, and Casey Kartchner. Elizabeth’s family, Cindy and the late Kevin Brown. Camille (Matt) Smith, Ashley (Chris) Miles, KC Brown, Josh Brown, and Jonathan Brown. He has 22 nieces and nephews who all deemed him their favorite uncle. He was a true friend and adventurer! He led his family and friends to the mountains to camp, to the beach to catch waves, to Disneyland to ride Splash Mountain 15 times in a row. He made every bad day good and every good day better. Collin never put anything above his family and he truly had individual relationships with each of his beautiful children. Of all the energy he put out into the world he gave his family tenfold. This loss is devastating to so many and his family finds peace in knowing they will see him again. We honor his memory by putting our phones down, finding someone to serve, and truly connecting with those around us. Private funeral services will be held Monday, October 26, 2020 and a celebration of his life will be announced soon. In lieu of flowers, please consider donating to his surviving family via Venmo @Elizabeth-Kartchner. Condolences may be expressed at www.bergmortuary.com.

Collin Stanley Kartchner of Pleasant Grove, Utah suddenly and unexpectedly passed away October 20, 2020 surrounded by family. The cause of death is still unknown, but believed to be an undiscovered medical condition. He was born July 29, 1980... View Obituary & Service Information

The family of Collin Stanley Kartchner created this Life Tributes page to make it easy to share your memories.

Send flowers to the Kartchner family.