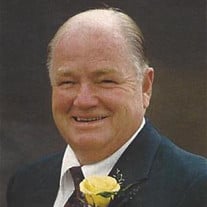 Conrad Gerald Stone, 87, passed away peacefully at his home November 26, 2016. He was born January 18, 1929 in Herriman, Utah to Gerald and Grace Stone. He was raised in Provo, Utah and attended school there graduating from Provo High. A life-long member of The Church of Jesus Christ of Latter-day Saints, he served an honorable mission to the Southern States Mission. Upon returning home he married his sweetheart, Elizabeth Walker. The two were married in the Manti Temple, January 16, 1951. He then enlisted in the Navy and served during the Koren War from 1951 to 1954. Conrad worked for US Steel at the Geneva Works in Production Planning while raising their family of five children. He was a hard worker and worked well into his 80’s. Service was something he learned early in life and was always thinking of ways he could help others. He served the Lord in many capacities including: councilor in a bishopric, elders quorum and young men’s presidencies; ward and stake clerk as well as an executive secretary. He also served as a temple worker. Missionary work was always very important to him. He was able to serve a mission with his sweet wife later in life. He was also a ward mission leader and a stake misssionary. His greatest joy was his family. He loved his wife and best friend (of 65 years), his children, grandchildren, and great-grandchildren with all his heart. Conrad is survived by his wife, Elizabeth; children: Paula Tervort (Tom), Pamela Barnes (Robb), Sandy McGee (Randy), Joseph Stone (deceased), and James Stone (Patrice); 20 grandchildren and 62 great-grandchildren. Funeral services will be held at 11:00 a.m., Saturday, December 3, 2016 at the Cherry Hill 3rd Ward Chapel, 1650 South 200 East, Orem, Utah. Friends may call at the Berg Mortuary of Provo, 185 East Center Street, Friday, December 2, from 6-8:00 p.m. and at the church Saturday from 9:30-10:45 a.m. prior to services. Interment, Provo City Cemetery. Condolences may be expressed at www.bergmortuary.com.

Conrad Gerald Stone, 87, passed away peacefully at his home November 26, 2016. He was born January 18, 1929 in Herriman, Utah to Gerald and Grace Stone. He was raised in Provo, Utah and attended school there graduating from Provo High. A life-long... View Obituary & Service Information

The family of Conrad Gerald Stone created this Life Tributes page to make it easy to share your memories.

Conrad Gerald Stone, 87, passed away peacefully at his home November...

Send flowers to the Stone family.