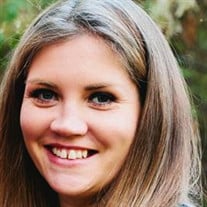 Crystal Thomas Hardy was born on December 21, 1981 to Gordon D. Thomas and Patricia Ann Haskell. She is the beloved baby of 5 children. Crystal came home from the hospital in a Christmas stocking and was momentarily placed on the family Christmas tree as the most precious ornament. She graduated from Provo High School in 2000 as a proud bulldog! She was a member of the Utah Valley Children's Choir for many years and participated in Choir Tours around the country sharing her love of the gospel, music and adventure. She met her sweet husband, David Hardy in 2001 and they were married in June of 2005. In the 11 years they had three beautiful children: Drexton (10) McKenzie (6) and little Tess (1). She loved the outdoors and all the adventures she had with her family in the mountains, spending time at their family cabin. She was a hard worker and enjoyed helping with the family business and serving those around her. She was a skilled singer; a funny bright adventurous daughter of God. Their children were and are her greatest joy. Crystal’s greatest love is her family. She has joined those who have gone before her and we know she is received with love and peace. She was preceded in death by her brother, Sidney David Thomas and her mother, Patricia Ann Downing. She is survived by her husband, David Hardy; children: Drexton, McKenzie and Tess; father, Gordon D. Thomas; siblings: Perry (Caroline) Thomas, Michelle (Brannen) Guthire and Nena (Josh) Cox, in-laws, Steve and Tammy Hardy, Sandy (Brian) Lakes, Crystal (Michael) Parker, Tonya (Dave) Barnes, Taylor Hardy and Bryce Hardy; 7 nephews and 8 nieces. Funeral services will be held at 2:00 p.m., Wednesday, December 28, 2016 at the Slate Canyon 8th Ward Chapel, 1625 South Slate Canyon Drive, Provo, Utah. There will be a viewing for friends and family on Tuesday, December 27, at the Berg Mortuary of Provo, 185 East Center Street, from 6-8:00 p.m. and at the church Wednesday, from 12:30-1:45 p.m. prior to services. Interment will be at the Provo City Cemetery. Condolences may be expressed at www.bergmortuary.com. In lieu of flowers, the family requests donations be made to https://www.gofundme.com/crystal-hardy-funeral-fund.

Crystal Thomas Hardy was born on December 21, 1981 to Gordon D. Thomas and Patricia Ann Haskell. She is the beloved baby of 5 children. Crystal came home from the hospital in a Christmas stocking and was momentarily placed on the family Christmas... View Obituary & Service Information

The family of Crystal Thomas Hardy created this Life Tributes page to make it easy to share your memories.

Send flowers to the Hardy family.