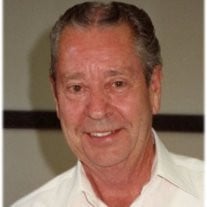 Our loving Father, Grandfather, Great-Grandfather and Patriarch of our family, Curtis L. Hatcher, passed from our lives August 27, 2013 in Provo, Utah after a lengthy bout with Alzheimer’s disease. He is survived by his wife of sixty-five years, Dolores L. Putnam Hatcher, daughter Karolee H. Mehew (Randall) of Provo, Utah and daughter Claudia M. Cook ( Larry, deceased) of Bakersfield, California, 7 grandchildren and 15 great-grandchildren all of whom have called him “Grangee” as he was known to friends and family members. He was born December 30, 1927 to Curtis and Sadie Hatcher in Rhodell, West Virginia, the oldest of four children. He was preceded in death by his brothers James and Thomas and is survived by his sister Mary June Dunlap of Porterville, California. Dad served in the United States Navy from 1946 to 1948 as a radioman aboard a sea rescue plane stationed in the Philippine Islands. After an Honorable Discharge from the military, he and his sweetheart started their married life in Porterville, California and three years later moved to Bakersfield, California in 1952, where Dad worked for a cement company for eighteen years. He was then offered a position with the Rosedale School District in charge of Transportation and Maintenance where he worked until his retirement in 1992. Called to serve as a Bishop of the Bakersfield 7th Ward and again as Bishop of the Bakersfield 10th Ward, his devotion to the work was amazing. He served for twelve years on the Stake High Council and the majority of that time as the senior member. He and his sweet companion worked in the Los Angeles Temple as Ordinance Workers the last week of every month for eleven years. For that week, Tuesday through Saturday, family members knew that Grangee and Nano were in the Temple. Dad’s love of the Temple was legendary, and his enthusiasm for the work was contagious. His example and influence have been, and will forever be, felt by all who came in contact with him. Dad was known for his quick wit and lightning fast one-liners that could surprise and amaze anyone, anywhere, anytime at anyplace. He had an incredible smile that could change anyone’s dark day into the brightest, and he was always quick to compliment and build up those who might be feeling a little down. Dad could also be strict about what was right and wrong, but loving about what needed to be corrected. As his daughters, we were overwhelmed with his love and affection for us, and as his grandchildren and great-grandchildren the love and concern for each child was something precious to behold. Hugs and kisses were frequent, being told “I love you” came often, and knowing that if you ever needed him, he would be there no matter what he had to do to get to you, are all tender memories we will always hold dear in our hearts. Dad’s love for our Mother was well known among family and friends, and is one of the great love stories of all time. They were joined in matrimony, in harmony, in companionship, and in their love and service to The Savior, Jesus Christ. Even in the final stages of the insidious disease that claimed his mortal existence, he would look at Mom and say, “there’s my girl”. This Hatcher Clan is very grateful for this honorable man and the exemplary life he gave to all of us. We love you Dad; thanks for never failing us. Hope you had a good trip home. Funeral services will be held at 11:00 a.m., Tuesday, September 3, 2013 at the Pleasant View 9th Ward Chapel, 2445 North 650 East, Provo, Utah. Friends may call from 10:00-10:45 a.m. prior to services. Interment will be in the Utah Veteran’s Memorial Park, 17111 S. Camp Williams Dr., Bluffdale, Utah. Condolences may be sent at www.bergmortuary.com.

Our loving Father, Grandfather, Great-Grandfather and Patriarch of our family, Curtis L. Hatcher, passed from our lives August 27, 2013 in Provo, Utah after a lengthy bout with Alzheimer&#8217;s disease. He is survived by his wife of sixty-five... View Obituary & Service Information

The family of Curtis Lee Hatcher created this Life Tributes page to make it easy to share your memories.

Send flowers to the Hatcher family.