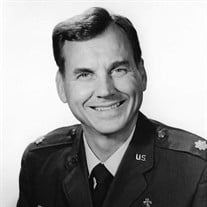 One of the most remarkable men of our time, Lt. Colonel Curtis Everett Ledbetter, Ph.D., completed his mission on this earth March 24, 2022, in Springfield, Massachusetts. Enduringly a witness to God’s divine providence, our father would always say with an optimistic smile and twinkle in his eye, “I do not know what my future holds, but I know who holds my future.” As a young man he would characteristically endorse his photograph with Proverbs 3:6, “In all thy ways acknowledge him, and he shall direct thy paths.” Our father was given opportunities to travel the world, and in every situation, he was a messenger of hope and a vehicle of service. He went out of his way to assist his fellow man; no sacrifice was too great for him to make if it blessed another life. He expressed gratitude unceasingly and never missed an opportunity to complement the good in others. Dr. Ledbetter was born on May 16, 1928, in Waco, Texas to Theodore Ollie and Sophie Emma Kattner Ledbetter. Although he experienced much sorrow as a young child by the death of his father and two siblings, this shaped his philosophy that grief is commensurate with love and should not be feared. When he first set eyes on the vivacious Virginia Ray Robinson at Southwestern University, he knew he had met his bride. They were married in Valley Mills, Texas, on September 2, 1951, and later sealed for time and eternity in the Salt Lake City Temple, August 8, 1966. Dr. Ledbetter received his Bachelor of Arts Degree in Political Science from Southwestern University and his Bachelor of Divinity Degree from Southern Methodist University. He entered the Air Force Chaplaincy in 1954. He served state side in California, Massachusetts, Colorado, and Texas, as well as abroad in England and Morocco where he received numerous commendations for outstanding spiritual leadership. Following eleven years on active duty, he served in the Utah Air National Guard Reserves until retirement. He considered it a privilege to be a veteran and he passionately loved his country. He understood that freedom did not come free, and he demonstrated humility and publicly expressed gratitude at the sacrifices many had made. After the family’s conversion to The Church of Jesus Christ of Latter-day Saints, he earned a second doctorate from Brigham Young University and taught ancient scripture from 1972-1983. As a professor, he became a legend around campus. Our brother, Lennon, remembers a locker-room chat as a new student fresh off his mission for the church. Some fellow teammates enthusiastically told him, “You just have to take a religion class from Brother Ledbetter because he is the best professor!” Lennon proudly exclaimed, “That’s my dad!” The professor was an entertaining storyteller, indeed, but it was his depth of knowledge, grasp of context, and keen insight that inspired his students. Later, the Ledbetters were entrepreneurs who assisted others in setting up their own businesses. They believed one of the greatest gifts they could give to others was teaching them how to leverage their time. With more time, they believed, people could do more good in the world. Our parents carved this mission statement into the heart of their business: “Building a legacy of faith, hope, and freedom. Strengthening families, developing leaders, and building teams with the vision to dream, courage to struggle, and persistence to victory!” Curtis and Virginia Ledbetter were the proud parents of four children and relished in their achievements and delighted in their spiritual growth. Dr. Ledbetter is survived by his sons, Lynn Robinson (Katie) and Lennon Everett (Connie); his daughters, Lynda Carol (Alan Hutchison) and Lyndal Lane Futrell; 17 grandchildren and 31 great grandchildren. His children thank our Heavenly Father for being tenderly and patiently guided by an earthly father who looked for the potential in each of us and then like an artist before his canvas, painted each of us in our most beautiful likeness. Funeral Services will be held at 11:00 a.m., Monday, April 4, 2022, at the Berg Drawing Room Chapel, 185 East Center Street, Provo, Utah. Viewing will begin at 10:00 a.m. Military honors will be delivered graveside at Eastlawn Memorial Hills Cemetery in Provo, Utah, by the American Legion Post #72. Condolences may be expressed at www.bergmortuary.com.

One of the most remarkable men of our time, Lt. Colonel Curtis Everett Ledbetter, Ph.D., completed his mission on this earth March 24, 2022, in Springfield, Massachusetts. Enduringly a witness to God&#8217;s divine providence, our father would... View Obituary & Service Information

The family of Lt. Col. Curtis Everett Ledbetter Ph.D. created this Life Tributes page to make it easy to share your memories.

One of the most remarkable men of our time, Lt. Colonel Curtis...

Send flowers to the Ledbetter family.