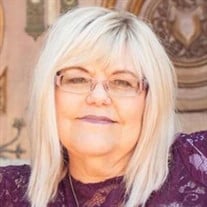 Cynthia Ann Dansie, loving mother, sister, and friend passed away on Saturday, January 29, 2022 at the age of 61, due to complications related to COVID-19, while surrounded by family and loved ones. Born on June 21, 1960 in Provo, Utah to Ray and Emily Wilson, Cindy was the only girl out of four kids. Cindy is survived by her son Austin (Kirsten) Dansie, and brothers Brad (Nancy) Wilson, Roger (Gaylene) Wilson, and Bryant (Pam) Wilson. Cindy attended Grandview Elementary in Provo, Utah and went on to attend Dixon Middle School and graduated from Provo High School in 1978. Cindy started working at the Tiffin Room inside of ZCMI after high school. She worked there for a couple years before taking a job at Jolene’s where she met and fell in love with John Dansie. John and Cindy married in 1989 and had their son Austin in 1991. Shortly after having Austin, her and John divorced, and Cindy and Austin moved back home with her beloved parents, where she raised her son. Shortly after her divorce Cindy took a position at Utah Valley Hospital as an Environmental Tech, where she worked for over 20 years and had planned on retiring from. Cindy was very close to both her parents and loved and cared for them in their older years. After the passing of her parents, Cindy purchased her childhood home where she resided until her passing. Cindy was a very loving mother and was proud to be Austin’s Mom. Austin was her best friend and pride and joy. She always referred to Austin as “my boy” and could not help but tell people how proud she was of her son. Cindy loved her family and had a big heart. She was a social butterfly who made friends anywhere she went, and always referred to new acquaintances as friends. Cindy will be missed dearly by many friends and family that she had left an impact on. Funeral services will be held at 11:00 a.m., Thursday, February 3, 2022 at the Grandview 15th Ward Chapel, 1122 Grand Avenue, Provo, Utah. Viewing will be held from 9:30-10:45 prior to services. Interment will be held in the Provo City Cemetery. Condolences may be expressed at www.bergmortuary.com.

Cynthia Ann Dansie, loving mother, sister, and friend passed away on Saturday, January 29, 2022 at the age of 61, due to complications related to COVID-19, while surrounded by family and loved ones. Born on June 21, 1960 in Provo, Utah to Ray... View Obituary & Service Information

The family of Cynthia Ann Dansie created this Life Tributes page to make it easy to share your memories.

Send flowers to the Dansie family.