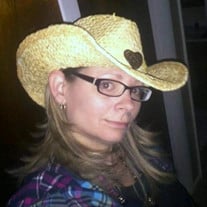 Cynthia Lea (Bahmiller) High finished her 16 month journey with Brain Cancer on Wednesday, February 11, 2015, at 11:06 pm. Cynthia passed away peacefully in her home with her husband by her side and surrounded by love. Cynthia was born in Sacramento, California on October 8, 1975 to Richard Holladay Bahmiller and Jaclyn Diaz. Cynthia attended Edward C. Reed High School in Sparks Nevada. She moved to Reno, Nevada when she was very young. There she spent her adolescent years. In 1992, shortly after the birth of her first child, Cynthia moved to Las Vegas, Nevada. In 2007, shortly after the birth of her fifth child, Cynthia moved to Orem, Utah where she lived at the time of her passing. Cynthia married the man that hung the stars, on June 26, 2003. They later became eternal companions December 4, 2013. Cynthia and Thayne had six children. Cynthia worked at Wyndham Worldwide Resorts from October 1999 to October 2007. Cynthia worked in several positions. When she resigned, in 2007, she was working as a Marketing Director at the Las Vegas Nevada Welcome Center. Her name was Cynthia (not Cyndi) and she was "kind of a big deal!" Her strong will, determination and extreme stubbornness made you love her until you were crazy, then you loved her even more. There was a reason people from Wyndham called her PITA. Cynthia could get any job done and though you, sometimes, hated the process, the results were always beautiful and breathtaking. Cynthia could find humor in any situation, including brain cancer. Her first tumor was a lime in her coconut. Cynthia could be found at the front of any battle. She truly governed her own life, even as a child. Cynthia knew when she could no longer handle a situation, which is best represented when she turned her life over to the will and care of God through the program of Alcoholics Anonymous. She took her recovery and sobriety more seriously than she had ever taken anything. The driving force in her recovery was her beautiful daughter, Falisha, and her desire to be her mother. She took control of her own salvation both figuratively and literally. Cynthia was not ever told what was going to happen, even with her medical treatment. Cynthia told doctors and nurses how it was going to be. She was the woman that spent one night in the ICU after a second brain surgery because she didn't like her medical care and demanded to be moved to a regular floor. Cynthia was diagnosed with primary anaplastic astrocytoma grade 3 in October of 2013. It was known almost from the beginning that it was very likely Cynthia would not live past two years. This began a journey with two brain surgeries, radiation, chemotherapy, a box full of medications, fluctuations in weight, changes in behavior and memory, a trip across 22 states, planning a funeral, selecting a casket, interviewing hospice companies, beginning hospice, and writing over 150 cards for her husband and children for birthdays, anniversaries, weddings, missions, and other life events. Throughout the journey she always remained on the front lines. The only one higher than she, that she would take orders from, was God himself, and as her mantra states "...I'll go where you want me to go, dear Lord..." Faith, courage, compassion, and determination forged her path in her life journey. She has, without a doubt, started her new journey with just as much, if not more, of the same. Though she will be greatly missed she has left a lasting legacy and explicit instructions to carry on. Cynthia is survived by her husband, Thayne High; her six children: Falisha (22), Katie (16), Braden (10), Cierra (8), Brianna (7), and Landon (4); her mother, Jaclyn Diaz; brother, Wayne Bahmiller; her favorite step-father, Thomas Griffin; and many loved family and friends. Funeral services will be held at 11:00 a.m., Wednesday, February 18, 2015 at the Steeplechase Ward Chapel, 150 East 1750 North, Orem, Utah. Friends may call at the Berg Mortuary of Orem, 500 North State Street, Tuesday, February 17, from 6-8:00 p.m. and at the church Wednesday, from 10-10:45 a.m. prior to services. Interment, Pleasant Grove City Cemetery, 500 North 100 West, Pleasant Grove, Utah. A luncheon will be provided for family and close friends after the graveside service back at the Steeplechase Chapel.

Cynthia Lea (Bahmiller) High finished her 16 month journey with Brain Cancer on Wednesday, February 11, 2015, at 11:06 pm. Cynthia passed away peacefully in her home with her husband by her side and surrounded by love. Cynthia was born in... View Obituary & Service Information

The family of Cynthia Lea Bahmiller High created this Life Tributes page to make it easy to share your memories.

Send flowers to the High family.