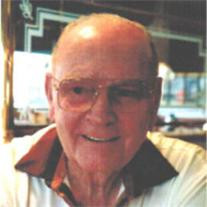 D.R. ("Doc") Norton, age 96, father, grandfather, uncle and friend passed away the morning of August 23, 2011 in St. George, Utah. He was born on March 22, 1915, in Panguitch, Utah to Merritt L. and Eliza Ann Cameron Norton. On February 27, 1935, Doc married his high school sweetheart, Naomi Gaisford, in Salt Lake City. Growing up in a family of 12 boys and 1 girl, D.R. being the second oldest, knew the value of hard work and applied it in everything he did. He was an extremely successful businessman in Provo. During the 60's, he founded and operated Commercial Tire with stores in several cities. D.R. had many loves including BYU, golf, sports, and spending time with friends at Riverside Country Club. The last few years he said many times how he missed his friends in Provo. D.R. is survived by two sons, DeRay and Robert; daughter, Shari (Ron Richmond); brother, Kenneth Norton; 11 grandchildren and 8 great-grandchildren. He was preceded in death by his parents, wife, 10 brothers and 1 sister. Graveside services will be held at 11:00 a.m., Monday, August 29, 2011 at the Provo City Cemetery, 160 South State Street. Friends and family are invited to attend. Condolences may be emailed to [email protected]

The family of D Norton created this Life Tributes page to make it easy to share your memories.

Send flowers to the Norton family.