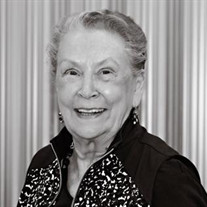 Dana Ellertson, sweetheart, mother, and grandmother, passed away December 8, 2017 at the Utah Valley Regional Medical Center from complications following surgery. She was 80 years old. Dana was born on September 16, 1937 in Provo, Utah, the daughter and second child of John Wallace Boswell and Edda Margaret Jones. She was raised in Provo, Utah, attending primary and secondary schools there, graduating from Provo High School. She married Richard Lee Ellertson, her high school sweetheart on April 29, 1955 in Provo, Utah, later solemnizing their marriage in the Salt Lake Temple. This past April they celebrated their 62nd wedding anniversary. Together they raised six children, Lori (Creig Rowley), Rick (Joyce), Eileen (Dave Workman), Lynnae (Doug McAllister), Robyn (Steve Metler) and Ryan (Laura). Dana possessed a great sense of humor, a beautiful infectious smile and a laugh that invited everyone to enjoy the fun. She was happy, easy-to-please and down-to-earth, creating a home with a warm welcoming spirit, something deeply felt and appreciated by family and friends alike. Dana was interested in many things. A highly creative individual, she always had a project in hand. Whether it was cross-stitching, knitting, sewing, quilting or the fine arts, Dana’s creations included tailored prom dresses, beautiful knit sweaters, adorable baby quilts and memorable wall hangings of every sort. She was a voracious reader, enjoying books from a variety of literary genres. Dana was also complimented constantly for her beautiful penmanship. Dana was an active member of the Church of Jesus Christ of Latter-day Saints serving in many capacities and callings including stake and ward Relief Society president and in a variety of teaching and leadership positions in the Primary, Young Women’s and Young Single Adults organizations. One of her most fulfilling callings was as a full-time missionary with her husband in Hawaii. She was a tireless servant of others, always ready to lend a helping hand to any and all that were in any degree of need. One of Dana’s greatest joys came from world travel. She visited Mexico, England, Australia, New Zealand and Fiji with her husband and, frequently, with her married children and spouses. She also traveled throughout the US, accompanying her husband to many locations related to his job responsibilities. Despite her many interests, talents and abilities, Dana was quick to say that her greatest achievements and loves were her relationship with her husband, her family and her love for and devotion to the Lord, Jesus Christ. Dana is survived by her husband, five children, twenty-six grandchildren and twenty-six great-grandchildren. She is preceded in death by her daughter, Lori. Funeral services will be held at 11:00 a.m., Friday, December 15, 2017 at the Maple Mountain Stake Center, 2188 East 100 South, Spanish Fork, Utah. Friends may call at the church Thursday, December 14 from 6:30-8:30 p.m. and Friday from 9:30-10:45 a.m. prior to services. Interment will follow at East Lawn Memorial Hills. Condolences may be expressed at www.bergmortuary.com.

The family of Dana Kaye Boswell Ellertson created this Life Tributes page to make it easy to share your memories.

Send flowers to the Ellertson family.