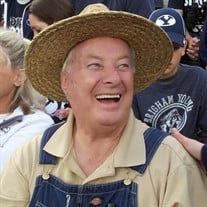 Danny Horace McGraw, beloved husband, father, and grandfather passed away quietly August 28, 2018 in Orem. Danny was born March 8, 1936 in Delta, Utah to Thomas E. McGraw and Helen Pack. He was a twin. His brother, Dennis, became his best friend and confidant. They had such love for each other. He and Dennis had two older brothers, Tom and Jerry, and a younger brother, Tim who still resides in Washington State, and an older sister, Colleen. The depression hit his family hard. They spent several years finding work where they could in California, Oregon, and Washington State picking fruit, vegetables, and hops. They finally settled in the Tacoma/Puyallup area of Washington State. Danny loved the outdoors and sports of all kinds. He excelled at football and baseball. He was the quarterback of the Bethel High School Braves and led the undefeated team to many wins. He was in the first graduating class of Bethel High. The entire football team has been inducted into the Bethel High School Hall of Fame. He was inducted as a key player into a separate induction of the Bethel High School Hall of Fame. He was the pitcher on the baseball team. Following graduation he continued to play baseball in the Tacoma semi-pro league. He attended one year at BYU. He married Judelle Frederickson and they had five children, Danny Lee (Miriam), Wendy (Pat Myer), Gary, Randy (Lonnie), and Connie (Joe Riggio). Following their divorce, he, Danny and Gary continued to live in Tacoma. He worked first as a surveyor on the Washington State freeway system between Tacoma and Seattle. Then he began his own business in concrete work. In time he expanded from flatwork to footings and foundations and eventually became a General Contractor in Utah. He married Kathleen Tyler on Valentine’s Day 1968 and they are eternal sweethearts. They celebrated fifty years of marriage this past Valentine’s Day. Together they have six children, Jeffery (Meg), Elias, Alan (Tammy), Dennis (Lisa), Joy, and Lisa (Jordan Rossean). Danny was a hard worker and passed that work ethic on to his children. Shortly after his marriage, he and Kathy, Danny, Gary, and Jeff moved to Utah where he has lived for nearly fifty years. His greatest love has always been his family. BYU football has been a close second and he has attended many games over the years and continued to follow them from his armchair at home. He was a member of The Church of Jesus Christ of Latter-day Saints and held many callings in whatever capacity he was asked. One of his favorites has been as a Primary teacher. He loves the children and could always get their attention. He would carry jelly-beans in his suit pocket to share. He and Kathy served a mission to Zimbabwe, Africa in 2005-2006. His many years of experience in serving in every capacity helped him to teach and train the leaders in the Gweru area of Zimbabwe. They loved him and he loved them. He has always been willing to help and serve others. Then again in 2014 he and Kathy served a mission in their Stake. Upon retiring from the construction business he continued to do the things he loved in building. He did most of the up-grades on their Provo home, putting in hardwood floors, crown molding, and re-positioning walls. The garage became his woodshop, where he would build things from wood. His bird-feeders were a work of art. He would help anyone at any time with whatever project they asked. He loved to help others and knew how to fix or build almost anything. Another love after retirement was growing a garden. He loved working with the soil and seeing the amazing things he could grow. He also raised and cared for chickens. Some were fancy, some were plain, and the eggs were great. Danny has sixty-five grandchildren, great-grandchildren, and great-great-grandchildren combined. We love him and miss him. He will be remembered for his kindness, generosity, and willingness to help others wherever and whenever help was needed. God bless, Danny. Funeral services will be held at 11:00 a.m., Thursday, September 6, 2018 at the Sunset Stake Center, 1560 South 1100 West, Provo, Utah. Friends may call at the Berg Mortuary of Provo, 185 East Center Street, Wednesday, September 5, from 6-8:00 p.m. and at the church Thursday from 9:30-10:30 a.m. prior to services. Interment will be in the Provo City Cemetery. Condolences may be expressed at www.bergmortuary.com.

The family of Danny Horace McGraw created this Life Tributes page to make it easy to share your memories.

Send flowers to the McGraw family.