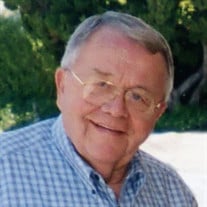 David Arthur Bond passed away at age 84 on July 13, 2014. He was born July 23, 1929 in Benton Harbor, MI to James Arthur Merval Bond and Deborah Dorothy Wagner (Bond Harris). He had an older brother, Maynard Wilson, and a younger brother, Glenn Merval, as well as a sister, Dorothy Ruth, who died in infancy. He was a very happy and optimistic person, and kept his good nature throughout his life. He was raised in Michigan; Vancouver Island, British Columbia; Seattle, WA; and California. He graduated from the University of Redlands, where he met his wife, Sydney Ann Richards. They married on July 31, 1953, shortly after graduation. They were sealed for time and all eternity in the Los Angeles Temple September 6, 1977. They spent the majority of their married life in Rancho Palos Verdes, CA. Three children joined the family: Susan Lee (Gary Chrystler) of Provo, UT; Richard Glenn (Carrie Cramer), and Carol Ann (S. Chap), both of FL. Dave has three beloved grandchildren: Katelyn Chrystler and Leland Avery and Charles Richard Bond. Sydney passed away February 10, 2009. In 2010, David married Caroline Johns Crawford. They enjoyed traveling and spending time together. Dave enlarged his family to include Michael Crawford, Kim Crawford, Jolene (Jack Crosby), Karin (Richard Singleton) and Janet (Pedram Aram) and their children. Dave was an engineer. During his career, he worked at Northrop, STL, and TRW. He was especially proud of the work he did heading the environmental test labs at Northrop as they developed the B2 Stealth Bomber. He was an active member of The Church of Jesus Christ of Latter-day Saints. He served as Bishop of the Harbor First Ward in San Pedro, CA. He also served as a Stake Patriarch in the Palos Verdes California Stake. The family would like to thank Amber and Carissa from Canyon Hospice as well as the caregivers from Comfort Keepers who allowed David to pass away where he wanted to be, in his own home with family around him. A viewing will be held at Berg Mortuary in Provo on Wednesday, July 16, 2014, from 6:00-8:00. Another viewing will be held at Green Hills Mortuary in Rancho Palos Verdes, CA, Friday, July 18 from 5:00-8:00. Funeral services will be at 11:00 Saturday, July 19, 2014, at The Church of Jesus Christ of Latter-Day Saints, 1635 W. 9th St., San Pedro, CA. A viewing will be held at the church before the funeral at 10:00.

David Arthur Bond passed away at age 84 on July 13, 2014. He was born July 23, 1929 in Benton Harbor, MI to James Arthur Merval Bond and Deborah Dorothy Wagner (Bond Harris). He had an older brother, Maynard Wilson, and a younger brother,... View Obituary & Service Information

The family of David Arthur Bond created this Life Tributes page to make it easy to share your memories.

Send flowers to the Bond family.