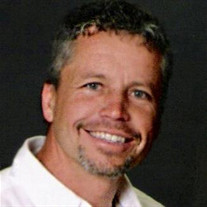 David Frank Chappell, 54, of Menan, Idaho, passed away Monday, July 31, 2017, with his family by his side. He fought hard for many years with health issues. He was born August 12, 1962 the second child and only son of Calvin Jay Chappell and Ruth Ellen Killpack Chappell. David grew up in Provo, Utah and graduated from Provo High School in 1980. He attended UTC (UVU) before serving a mission for the Church of Jesus Christ of Latter-day Saints in the Wisconsin, Milwaukie Mission. After his mission he worked at Jones Paint and Glass and South Valley Water Reclamation Facility. He married Judy Ellis and had three beautiful daughters, Kortnie, Stefanie and Kaycie. The marriage was dissolved after a few years. He later met and married the love of his life, Trudy Lee Morgan on December 23, 1994 and adopted her handsome son Jonathan to raise as his own. A couple years later they brought another beautiful daughter, Alexee, into their family. One month after she was born the family was sealed in the Mt. Timpanogos Utah LDS Temple. Dave served in many church callings and loved the great outdoors. He loved hunting and fishing and wanted everyone to love them just as much as he did. Dave loved to create and build things. He built shops, bird houses, benches and gazebos, ponds in his yards, cabinets, and tiled floors. He loved sunrises and sunsets, starry nights and rain storms. Dave taught his kids how to work hard and play hard. He was proud of his children and enjoyed every minute he could with his grandchildren. Dave loved wildlife and had many “wild” pets, even as an adult, such as weasel, magpie, goose, turtle, raccoon, skunk, fish, and many more. David is survived by his wife Trudy Chappell of Menan, Idaho. His children, Kortnie “Snort” (Joe) Shields of Roosevelt, Utah; Stefanie “Fanny” (Chase) Colby of Heber City, Utah; Kaycie “Jane” (Josh) Allred of Roosevelt, Utah; Jonathan “Jo Nathan” Chappell of Idaho Falls, Idaho; Alexee “Alex Lee” Chappell of Menan, Idaho. He has eight grandchildren: Danyelle, Micaela, Jaxson, Josie, Boston, Joshlyn, JesseJames and Hagen. His parents, Calvin and Ruth Chappell of Provo, Utah and his sisters Cathi (Boyd) Berry of Rexburg, Idaho and Lori (Scott) Connors of Pleasant Grove, Utah. He was preceded in death by his grandparents and his sister Julie. The family would like to thank all of his doctors and caregivers at University of Utah Hospital and EIRMC, Dr. Avondet, the nurses at Yellowstone Dialysis and Gem State Dialysis, his drivers at Tibbett’s Transportation and countless others who have been so good to help care for him over the years. A funeral service will be held Tuesday August 8, 2017 at 11:00am in the Pioneer 4th Ward building, 376 N. 700 W. Provo, Utah. A viewing will be Monday August 7th from 6-8:00pm at Berg Mortuary in Provo and again on Tuesday August 8th from 9:30-10:45am at the church. Interment will be at the Provo City Cemetery. A Memorial Service will be held at the Menan 2nd Ward LDS Church building, 3547 East Menan-Lorenzo Hwy in Menan, Idaho on August 12, 2017 at 2:00pm. Condolences may be expressed at www.bergmortuary.com.

David Frank Chappell, 54, of Menan, Idaho, passed away Monday, July 31, 2017, with his family by his side. He fought hard for many years with health issues. He was born August 12, 1962 the second child and only son of Calvin Jay Chappell and... View Obituary & Service Information

The family of David Frank Chappell created this Life Tributes page to make it easy to share your memories.

Send flowers to the Chappell family.