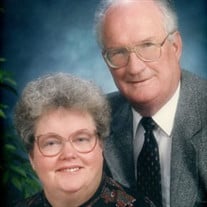 "Together Again" David Miller Donaldson was born October 2, 1924 to an honest blacksmith, John Kissel Donaldson and an angel homemaker, Mary Elizabeth Doxey in Ogden, Utah. He passed away Wednesday, July 2, 2014 at UVRMC in Provo. David was raised in the lean times and circumstances of the depression but his memories all came out positive. The defining event of his life was when at sixteen years-old he experienced the love of God in an excruciating, painful industrial accident. During combat in World War II and through his life, he never feared death. In fighting the Germans he earned expert BAR-rifleman status. He was rewarded a Purple Heart after “too numerous to count” wounds from a German land mine. He later came to love the German people and culture as he visited and sent two of his sons as missionaries to Germany. At the University of Utah, in an English class he met the love of his life Eliza Lavina Livingston. The teacher would read his hilarious writings. They married on August 14, 1947 in the Salt Lake Temple of The Church of Jesus Christ of Latter-day Saints. After completing his PhD and with significant financial sacrifice, he took a position teaching and researching in microbiology and immunology at BYU (1955-1989). He received the highest faculty awards and was committed to his many graduate students. Dad enjoyed his Great Books Group for over fifty years, watching BYU sports, fishing, hunting, art museums, travel and annual trips to Yellowstone National Park with his extended family. Dad served diligently in his church callings whether as home teacher, Bishop, cub master or Young Mens leader. He supported eight sons on their missions and donated to out-going missionaries. He is preceded in death by his parents, wife, eight half siblings (John, Bob, Darrel, May, Jack, Hazel, Arlene and Walt), his infant brother Ralph, a sister Ruth (and Loa), and a great grandson Thomas Collett. Left orphaned are: David (Nancy), Mark (Leslie), John (Christine), Stephen (Sharon), Rebecca, Paul (Debbie), Craig (Alice), Matthew (Meredith), Daniel (Liz). He was generous and his home was always open for his forty-three grandchildren and sixty-nine great-grandchildren. He is missed by his siblings: Jay (Lila), Harold (Martha Ann), Joan (Ed), Helen (Blaine), Barbara (Dale), Paul (Karma) and Carol (Keith) and in-laws Parley Joe (Joanne) Livingston and Louise (Ed) L. Erickson. His sacrifice and service to family (nuclear, extended and in-laws), church, BYU, neighbors, and friends cannot be counted but is recorded in heaven and in our hearts. His substantial worldly accomplishments paled to his great love and devotion to his parents, siblings, children, grandchildren and “great-grands.” He in-turn appreciated the service they extended to him. Dad and Mom felt undeserving of the abundant, good fortune in their lives and family. We extend our deepest appreciation to all of the healthcare professionals and staff who went the extra mile to help our Dad, particularly Tom Meyers MD (former graduate student). Dad was able to remain at home these last ten years because of his devoted daughter, Rebecca. He appreciated friends that visited frequently. David Miller Donaldson told his posterity on Father’s Day 2014 in his usual, witty way, “Adios.” We replied then as we do now, “It was a great blessing to have you as our Dad.” The funeral for David will be held at 1:00 p.m., Saturday, July 5, 2014 at the Edgemont 2nd Ward Chapel, 555 E. 3230 N. Provo, Utah. Friends may call at the church on Saturday morning from 10:30 a.m. until 12:30 p.m. Interment, Eastlawn Memorial Hills. All are welcome. Condolences may be sent online at www.bergmortuary.com.

"Together Again" David Miller Donaldson was born October 2, 1924 to an honest blacksmith, John Kissel Donaldson and an angel homemaker, Mary Elizabeth Doxey in Ogden, Utah. He passed away Wednesday, July 2, 2014 at UVRMC in Provo. David was... View Obituary & Service Information

The family of David Miller Donaldson created this Life Tributes page to make it easy to share your memories.

Send flowers to the Donaldson family.