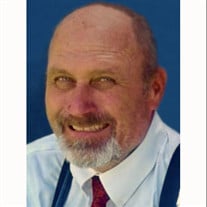 A true warrior, our hero, David G. Kaplar, won his courageous fight against cancer on October 15th, 2018. He was born December 16th, 1963, in Provo, UT to Brown and Phyllis Kaplar. He was always his dad’s little helper, always by his side. On October 15th he had a joyful reunion with his father. He was an active member of The Church of Jesus Christ of Latter-day Saints, and served in many callings. He loved to work with the youth and was an Eagle Scout. David had a way of making everyone feel special and loved. He always had a smile on his face, quiet, soft spoken, and never complained. He had an incredible relationship with his Heavenly Father, he let his light shine to all of those he came in contact with. He was one who always wanted to take care of everybody and fix everything. At a young age, David started working on cars, building up his own auto body shop where he would restore exotic cars, leading into fiber glass repair and gel coat work on boats. He is survived by his wife Judy Maag Kaplar of Orem, and his children: Cole (Ali), Cameran, Whitney (Austin), Quinn (Kelsie), and Jade (Zach). His mother Phyllis of Provo. Brother Brian (Janet), Sisters: Diane (Terry), Linda (Mark), Janet (John), and Lisa. And his 10 grandchildren. We love you Dave, and the classic saying, everything will be just peachy. Funeral services will be held at 11:00 a.m., Friday, October 19th, 2018 at the Aspen 3rd Ward Chapel, 1546 North 1100 West, Orem, Utah 84057. Interment at the Orem City Cemetery. Condolences may be expressed at www.bergmortuary.com.

A true warrior, our hero, David G. Kaplar, won his courageous fight against cancer on October 15th, 2018. He was born December 16th, 1963, in Provo, UT to Brown and Phyllis Kaplar. He was always his dad&#8217;s little helper, always by his side.... View Obituary & Service Information

The family of David G. Kaplar created this Life Tributes page to make it easy to share your memories.

Send flowers to the Kaplar family.