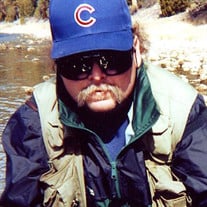 David Brent Ward, age 55, passed away at his Provo home on January 7, 2016, with his family at his side. Dave was born September 23, 1960, in Salt Lake City, Utah, to Ernest L. and Mary Anne English Ward. When David was 5 years old, he and his family moved to Washington State. He was educated in Coulee City, Washington schools. Following graduation Dave served an L.D.S. mission in the Texas – Dallas Mission from 1981 to 1983. Upon his return from his mission, he moved to Utah. There, he met and married Jennifer Truxal on May 3, 1996 in Pleasant Grove, Utah. He was employed by NuSkin Corporation as a Facilities Manager for the past 25 years. Dave and his wife Jennifer were best friends and enjoyed being together, travelling, cooking and doing things with the children. He had many talents and interests. He enjoyed the out of doors, especially fishing, hunting and camping. His favorite fishing companions were his son, T.R. (Taylor) and his daughter, Becca. The family enjoyed camping. Their trips to Washington always included visiting family and fishing at his favorite fishing spots. Mile marker 15 and the “arm” were special places for Dave, T.R. and Becca to fish. He drew a special permit for the Elk hunt of his life in Monroe, Utah. He bagged a 360 bull. Dave also enjoyed writing and was planning to write stories about his outdoor adventures and family. He was a compassionate, giving man, always concerned about others and willing to help and teach them skills they could use in their own lives, especially fishing. Dave is survived by his loving wife Jenny; his children, Taylor (T.R.), Becca and Holly Salmond; his granddaughter, Sophie; two brothers, Randy and Jeff Ward; two sisters, Wendy Olbricht and Marcy Manderscheid; step-brothers, Derrick and Pat; stepsisters, Candice and Diana; his mother and step-father, Mary Anne and Russ Kershner; his mother-in-law, Marilyn Hamburg; sister-in-law, Tracy; as well as several aunts, uncles, nieces and nephews and numerous cousins. He was preceded in death by his father; his step-father Merle Simons; and his grandparents, Delmer and Sinda Ruth Anderton English. Funeral services will be held on Tuesday, January 12, 2016 at 11:00 a.m. in the Parkway 5th Ward Chapel, 2801 West 620 North, Provo, Utah. Friends may call at the church on Tuesday morning from 9:30 until 10:30. Interment will follow at a later date in Hartline, Washington. To send condolences to the family, please visit www.bergmortuary.com.

David Brent Ward, age 55, passed away at his Provo home on January 7, 2016, with his family at his side. Dave was born September 23, 1960, in Salt Lake City, Utah, to Ernest L. and Mary Anne English Ward. When David was 5 years old, he and... View Obituary & Service Information

The family of David Brent Ward created this Life Tributes page to make it easy to share your memories.

David Brent Ward, age 55, passed away at his Provo home on January...