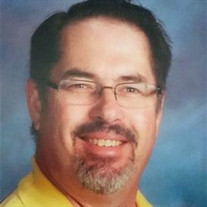 Our loving husband, father, grandfather, son, brother, uncle, and friend, David A. Webb, returned to the loving arms of his Heavenly Father on Thursday, September 24, 2015. David was born June 20, 1961, in Glendale, California. He moved to Provo with his family when he was in high school. He faithfully served an LDS mission to Denver, Colorado and had the opportunity to revisit earlier this summer for the first time with his beautiful Debbie, celebrating her 50th birthday and their 30th wedding anniversary. On August 30, 1985, he married Debbie Campbell, the girl next door and the love of his life, in the Provo, Utah Temple for time and all eternity. Two years later they were blessed with twins, Mandie Amelia and Chad David. Their daughter, Jamie Marie, arrived two years later, and another daughter, Kaylee Lorie, joined their family six years later. He loved his children; daughter-in-law, Tosha; soon to be son-in-law, Matt; and grandchildren, Aly and Kaidyn greatly and was incredibly proud of the people they have become and their many accomplishments. Oh, how he loved his family! Over the years David was honored to work for Nu Skin, Provo School District, Progrexion Marketing, and Macey’s Grocery. He had an uncanny ability to talk to anyone and, as a result, made many friends with his co-workers and customers. All throughout his life he was an avid scouter, handy man, leader, mentor, example, and blessed the lives of whoever had the opportunity to meet him. He was a rock for you to depend on in any situation in life. He was always there to help whoever and whenever there was a need. He had a great love for our country and the flag. He took great joy in celebrating Eagle Scouts with beautiful flag ceremonies. David knew and loved our Heavenly Father and Savior, Jesus Christ. He had a deep testimony of the gospel and honored the priesthood. He loved serving the youth, especially currently as Ward Clerk in the YSA 215th Ward. While our hearts are broken, we take great comfort in knowing that through the sealing power of the temple, we will be with our David again! We love you!! David is preceded in death by his father-in-law, Ned Campbell; beloved grandparents; and brother, Joe. He is survived by his loving wife, Debbie; children, Mandie, Chad (Natosha), Jamie (Matt), and Kaylee; granddaughters, Alyson and Kaidyn; parents, Gary Webb and Carmen Swanson; brothers and sisters, Scott, Michael, Bethany, Ruth, Jacob, Elaine, and James; mother-in-law, Mary Campbell; and numerous family and friends. Funeral services will be held at 11:00 a.m., Wednesday, September 30, 2015 at the Sunset Stake Center, 1560 South 1100 West, Provo, Utah. Friends may call at the Berg Mortuary of Provo, 185 East Center Street, Tuesday from 6-8:00 p.m. and at the church Wednesday from 9:30-10:45 a.m prior to services. Interment, Provo City Cemetery. Condolences may be extended to the family at www.bergmortuary.com.

Our loving husband, father, grandfather, son, brother, uncle, and friend, David A. Webb, returned to the loving arms of his Heavenly Father on Thursday, September 24, 2015. David was born June 20, 1961, in Glendale, California. He moved to... View Obituary & Service Information

The family of David A. Webb created this Life Tributes page to make it easy to share your memories.

Send flowers to the Webb family.