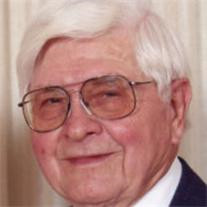 Dean was born March 5, 1923 to Erma Mae Dixon and Arnold V. Boshard in Provo, Utah. He died March 23, 2011 at his home at the age of 88. He graduated from Provo High School in June 1941. That summer he worked at Yellowstone Park at the Museum at Mammoth. Dean enrolled in BYU for a year, where he joined the V5 Naval Aviation Program. He served in the Navy during World War II and at the Panama Navigation School he became a Pilot Area Combat Seaman. He received his wings in 1944. When he returned home he enrolled at BYU again where he graduated with a Pre-Dental degree. At BYU he met his love and sweetheart, Norma Heatherly, from South Carolina. They were married May 22, 1948 and sealed in the Salt Lake Temple-- June 1951. Dean had a wonderful singing voice. He loved to sing at church and with the Barbershop Quartet Group in Provo. He started his own business in Provo in 1957, Boshard Electric Inc., where he worked until he was 85. He worked with his sons, daughter, son-in-law and many grandchildren until he retired. He was a member of the Church of Jesus Christ of Latter-day Saints, where he served as Elders Quorum President, Stake Mission President, and a member of the Bishopric in the Pleasant View 3rd Ward. He moved to the Edgemont 14th Ward in 1978 and served as High Priest Group Leader, Provo Temple Ordinance Worker, Building Maintenance Director, and Stake Extraction Director for the Edgemont Stake. He loved to play golf, deer hunt, and work at the Stake Welfare farm. He was a long time member of the Rotary Club and of Riverside Country Club. He enjoyed watching BYU Sports and was a longtime member of the Cougar Club. Dean loved to take his family camping in the great outdoors. He also loved to play with his grandchildren and great-grandchildren. He is survived by this wife, Norma, children Norman D. Boshard (Dianne), Ann Wakefield (Alan), Arnold Von Boshard (Andrea), and a brother Bliss A. Boshard of St. George. He has 13 grandchildren and 20 great-grandchildren. Funeral services will be held at 11:00 a.m., Monday, March 28, 2011 at the Edgemont 14th Ward Chapel, 4000 North Foothill Drive, Provo. Friends may call at the Berg Mortuary of Provo, 185 East Center, Sunday evening from 6 until 8 and at the church Monday one hour prior to services. Interment, East Lawn Memorial Hills. Condolences may be sent to the family through www.bergmortuary.com.

Dean was born March 5, 1923 to Erma Mae Dixon and Arnold V. Boshard in Provo, Utah. He died March 23, 2011 at his home at the age of 88. He graduated from Provo High School in June 1941. That summer he worked at Yellowstone Park at the Museum... View Obituary & Service Information

The family of Dean Boshard created this Life Tributes page to make it easy to share your memories.

Send flowers to the Boshard family.