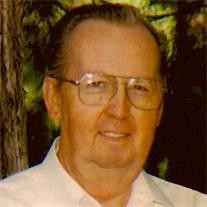 Dean Jay Madsen, beloved husband, father, brother and grandpa-extraordinaire, age 78, of Orem, Utah, passed away unexpectedly on Tuesday, April 26, 2011, surrounded by family and friends. He was born on June 3, 1932 to Niels Halvor Madsen and Sarah LaVon Ellis. He was the second of four sons. For Dean, membership in The Church of Jesus Christ of Latter-day Saints meant daily privileges to love, serve and give. He truly loved the Savior with all his heart, was a devoted disciple and followed the Master's admonition to go about doing good. As a result, he made a difference for many. Dean's tender testimony was a natural extension of who he was. He served in the North Germany mission, and held many church callings throughout his life. He was honored to serve as a temple worker in the Provo, Utah Temple and was currently serving in the Mount Timpanogos Temple. Dean's beautiful and powerful singing voice is a fitting tribute to the man. He loved to sing with his brothers in what many described as "perfect harmony." Above all, Dean lived his life in crescendo, setting an example for all to follow. Dean served in various branches of the United States military, including a period as an active duty radar operator for the Air Force in Korea. He retired from the Navy in 1981, and maintained strong friendships with his colleagues over the years. Dean also worked as a Corrections Officer for the State of Utah until he retired in 1989. The full-sized flagpole in the yard spoke volumes concerning Dean's love of country, dedication to freedom and desire to serve. Dean married Marilyn Kay McPherron on Dec. 3, 1960. Together they raised a family of six children. He was a devoted husband and treasured his family - first, last and always! Family trips were not about destinations, locations or accommodations, but were about being together, sharing stories, learning about history and laughing until we cried. There was never any doubt about where Dean would be. (Always there for those he loved.) Dean was known for his love of calligraphy, cribbage, hummingbirds, flowers, western and war movies, working in the yard, and Miracle Whip. He spent countless hours on the back porch swing, sharing his love of reading with the grandkids. Dean was preceded in death by his parents and his brother Richard. He is survived by his beloved wife of 50 years, brothers Stan (Anne) of Bountiful and Ray (DeAnne) of Centerville, six children Rand Madsen of Orem, Michelle Roach of American Fork, Lori (Darin) Pack of Lehi, Melanie (Scott) Brower of Pleasant Grove, Kirk (Johanna) Madsen of Orem, and Ryan Madsen of Orem, 16 grandchildren, 7 great-grandchildren, and his hummingbird pal Fred. The family would like to thank Utah Valley Regional Medical Center ER and ICU for their efforts. You guys were amazing. We'd also like to thank ward members and friends who have done so much for us. Thank you, thank you, thank you! Funeral services will be held at 11:00 am on Monday, May 2nd in the Lakeview 7th Ward Chapel, 155 W 1600 S, Orem, Utah. A viewing will be held at the Berg Mortuary in Provo, 185 East Center Street, on Sunday night (May 1st) from 6:00 to 8:00 pm. Family may call at 9:45 to 10:45 am at the chapel prior to the service on Monday. Dean will be buried in the Orem City Cemetery with Military Honors. Condolences may be sent through www.bergmortuary.com or [email protected]

The family of Dean Madsen created this Life Tributes page to make it easy to share your memories.