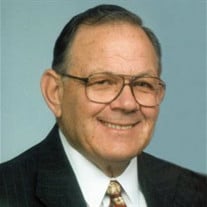 Delano Parker Thomas, 82, passed away peacefully at his home in Provo, UT, Thursday, May 19, 2016 of Liver Cancer. Delano was born August 9, 1933 as the oldest child to Parker Emanuel Thomas and Wilhelmina (Mimi) Heiss Thomas in Lovell, WY. He grew up there as well as other towns in Wyoming such as Casper, Byron, and Greybull. Because German was spoken in the home, Delano struggled to excel his first year of schooling and was held back a year to again attend first grade with his beloved sister, Charmaine. Delano's father, Parker, bought and sold used pipe and would often bring Delano along as a young boy to steer the truck while his father read the newspaper...looking up occasionally to straighten out Delano's unsteady driving capabilities! Delano would oft times help his Grandfather Emanuel Thomas on the farm during the long depression years. Delano remembers driving the tractor at age 12 when he heard the news that WWII was over. Later he would serve in the Army and tout his knowledge of WWII, fighter planes and the like as he was an avid historian and liked to hold captive audiences as he reminisced. Delano graduated from Greybull High School and continued his schooling at the University of Utah and BYU. His mother, who was a professional opera singer, also taught voice lessons to Delano. At age 18, Delano became the youngest member of the Mormon Tabernacle Choir due to his beautiful, rich, baritone voice. He went on to serve an LDS mission in the Eastern States where he met his bride to be, Virgie 'Faye' Palmer, from Rupert, ID, who was traveling with her father as he returned home from his mission. Delano and Faye corresponded by letters while Delano finished his mission. They were married in the Logan Temple on March 23, 1956. Delano was soon after drafted in the Army and he and Faye spent their young married years living in Oklahoma City where he was an Army Clerk and Medic. Their son John was born during this time. After the war, the couple moved to Provo, UT, and had two more sons, Kevin and Greg. Delano resumed his selling skills as a successful Fuller Brush salesman. Eventually, hard times hit and Delano nearly lost his life to a bleeding ulcer the same day his last son, Steven was born. After a couple of years of healing, he continued to work as a salesman and truck driver for various companies such as Jewel T and Quality Linen until he retired at age 59 to care for his aging father. After Parker's passing, Delano worked as a courier for his son’s mortgage corporation. In 1988, his beloved wife Faye passed away, but Delano found consoling words and comfort from her niece, Marcia Badger Sharp from Rigby, ID, whom he married just six months later in the Provo Utah Temple on March 11, 1989. He and Marcia enjoyed serving together as LDS Employment Missionaries. Delano also served as an LDS teacher (several times), a Bishopric Counselor, and High Priest Group Leader. Hobbies he enjoyed were camping in their fifth-wheel trailer, gardening, singing, rhyming, talking about cars and history. Delano is survived by his wife, Marcia Thomas, who so lovingly cared for him during his final days. He is also survived by his children: John (Carolyn) Thomas of Draper, UT, Kevin Thomas of Provo, UT, Greg (Jackie) Thomas of Highland, UT, Steven Thomas of Provo, UT; daughters-in-law: Heather Hirsche of Lindon, UT and Lynn Thomas of Santaquin, UT; step-children: Kristie Sharp of Portland, OR, Tanya Windham of West Jordan, UT, and Jared (Karen) Sharp of Riverton, UT; sibling, Yale Thomas of Kaysville, UT; 15 grandchildren, 12 great-grandchildren, and four step-grandchildren. He was preceded in death by his parents; his wife, Faye Thomas; and siblings: Charmaine Blanco, Nora Thomas, Darla Farha, and David Thomas. The family would like to thank CNS Hospice for helping with the care of Delano during his last days. Funeral services will be held at 11:00 a.m., Friday, May 27, 2016 at the Lakeside 8th Ward Chapel, 131 South 1600 West, Provo, Utah. Friends may call Thursday, May 26 at the Berg Mortuary of Provo, 185 East Center Street, from 6-8:00 p.m. and Friday at the church from 10-10:45 a.m. prior to services. Interment, East Lawn Memorial Hills. Condolences may be expressed to the family at www.bergmortuary.com.

The family of Delano Parker Thomas created this Life Tributes page to make it easy to share your memories.

Delano Parker Thomas, 82, passed away peacefully at his home...