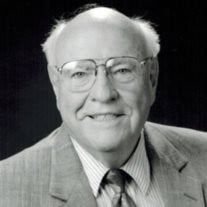 Delbert Harold McNamara, age 90, passed away on January 9, 2014 surrounded by his children and grandchildren after suffering a massive stroke the previous day. He was born on June 28, 1923 in Murray, Utah to Florence Evelyn Williams and Delbert H McNamara. Harold became fascinated with astronomy and history as a boy although he also enjoyed sports and (in high school) debate. Later he enrolled at the University of Utah. His studies were interrupted by service as an Ensign in the Navy in World War II. After a severe attack on his ship he was given survivor’s leave during which time he married the love of his life, beautiful Elmeda Robison, on February 21, 1945 in Palo Alto, California. They were sealed in the Salt Lake LDS Temple one month later. They enjoyed heaven on earth for over 50 years before Elmeda’s sudden passing in 1996. After the war, Harold enrolled at the University of California at Berkeley where he completed his bachelor’s degree, doctorate degree, and a post-doctorate research fellowship. Harold and Elmeda were blessed by the births of their three children during this time. Harold began his career at BYU in 1955, retiring as a professor of astrophysics over 50 years later at age 83--yet continuing to publish. He edited over 200 volumes for the Astronomical Society of the Pacific and contributed over 100 scientific journal articles on his own research. One of his latest articles will be published posthumously. He received many honors and awards including the George Van Biesbroek Prize from the American Astronomical Society (2000), Karl G. Maeser Research Award (1966), and Wesley P. Lloyd Award for Distinction in Excellence in Graduate Education (1982-83). His work allowed him and his wife to travel to many foreign lands. Harold was a good and gracious man who encouraged his family and others to learn about the world and treat others with respect and kindness. He served faithfully in various LDS Church callings and was a dedicated a home teacher. He is survived by his loving children, Marilyn (Bruce) Gurney, Susan (Dave) Comish, Jay (Mary Lou) McNamara; 18 grandchildren; and 49 great-grandchildren, all of whom who were blessed by his generosity and example. He was preceded in death by his brother Van, his parents, and his dear wife, Elmeda. Funeral services will be held at 11:00 a.m., Wednesday, January 15, 2014 at the Oak Hills 9th Ward Chapel, 1960 North 1500 East, Provo, Utah. Friends may call at the Berg Mortuary of Provo, 185 East Center Street, Tuesday, January 14 from 6-8:00 p.m. and at the church Wednesday from 9:00-10:45 a.m. prior to services. Interment, East Lawn Memorial Hills, Provo, Utah. Condolences may be sent online at www.bergmortuary.com.

Delbert Harold McNamara, age 90, passed away on January 9, 2014 surrounded by his children and grandchildren after suffering a massive stroke the previous day. He was born on June 28, 1923 in Murray, Utah to Florence Evelyn Williams and Delbert... View Obituary & Service Information

The family of Dr. Delbert Harold McNamara created this Life Tributes page to make it easy to share your memories.

Send flowers to the McNamara family.